And Adam said, “The woman that you placed with me, she gave me from the tree and I ate.”

Adam HaRishon was given one mitzvah: not to eat from the Eitz HaDaas Tov VaRa. When he transgressed it, Hashem gave him the opportunity to do t’shuvah. Not only didn’t Adam repent, he played the blame game: “It was that woman that You gave to me. You gave her to me as a helpmate; she turned out to be my ruination.”

Rashi quotes the Gemara, which calls Adam a kofeh tov, one who denies the good. The Gemara explains that this is a trait that has plagued mankind from that moment. Instead of appreciating the good, man has continued to deny the very good that is given to him over and over again.

The difficulty with this Rashi is that it doesn’t seem that Adam was guilty of denying the good. Hashem appeared to him and he felt trapped, caught red-handed. The correct action on his part would have been to admit his guilt and beg for forgiveness. That isn’t what he did. Instead, he engaged in small-minded shifting of the blame. However, there was logic to it: “Because she was given to me as a helpmate, I relied on her and trusted her.” That fact does mitigate his guilt. After all, no one less than the Creator of the heavens and the earth gave him this woman as an aide. Surely he could trust Hashem’s choice.

Adam was guilty of not owning up to his responsibility for the act. Maybe he was guilty of being dishonest. He just wasn’t courageous enough to admit that he did wrong. But his sin wasn’t one of “not appreciating the good.”

The answer to this question lies in understanding a different perspective. The Chovos HaL’vavos gives a parable. Imagine a man who becomes blind at age 35. For the next ten years, he does his best to reconstruct his life, but now without sight. Being a fighter, he struggles to create a productive life for himself. One day, his doctor informs him of an experimental procedure that, if successful, would enable him to see again. He is both frightened and exuberant. If it works, he regains his sight; if it fails, he might die.

He gathers together his family to talk it over. After much debate, he announces, “I am going ahead with it.” The operation is scheduled. The long-awaited day arrives. Paralyzed with dread, he is wheeled toward the operating room. Given sedatives, he sleeps through the ten-hour operation.

When he wakes up, the first thought on his mind is to open his eyes. He prepares himself for the moment. He will now find out how he will spend the rest of his life. With his family gathered around, with the doctors and nurses at his side, the surgeon begins removing the gauze. The first bandage is off, now the second. The surgeon says, “Open your eyes.” He does. And he sees!

For the first time in ten years, he looks out and experiences the sights of this world, and he is struck by it all: struck by the brilliance of colors and shapes, moved by the beauty and magnificence of all that is now in front of him. He looks out the window and sees a meadow covered with beautiful green grass. He sees flowers in full bloom. He looks up and sees a clear, blue sky. He sees people, the faces of loved ones that had only been images in his mind – the sight of his own children whom he hasn’t seen in years. Tears well in his eyes as he speaks: “Doctor, what can I say? What can I ever do to repay you for what you have given me? This magnificent gift of sight! Thank you!”

This emotion, this extreme joy and sense of appreciation, is something that we should feel regularly. The feeling of elation that this man felt when he regained his sight is something that we can feel on a daily basis if we go through the process of training ourselves to feel it. We have this most precious, unparalleled gift called sight, and it is something that we are supposed to stop and think about – not once in a lifetime, not even once a year, but every day. A part of our spiritual growth is learning to appreciate the gifts that we have. One of the blessings we say every morning thanks Hashem for this most wonderful gift of sight. It was meant to be said with an outpouring of emotion.

We humans are a curious breed. We can have treasures for years, not once thinking of the wealth that we have been given, not once stopping to appreciate them – not taking a moment to be thankful for them, until something happens and we lose that gift. Then, it is “Hashem, why me? Of all the occupants of the planet, why did you pick me?” Until then there wasn’t a moment of reflection. Not one Thank You. Not even recognition that it was a gift. Now that it is gone, the complaints find their home.

We Fail to See the Good

The reason that we don’t appreciate the good is because we fail to recognize it. It isn’t a problem with appreciation; it is a problem of recognition. By nature we are very appreciative. “If I had any gift, if anyone were to ever do anything for me, I would be the most appreciative person in the world. The problem is that I have nothing. No one ever does anything for me.”

This seems to be the answer to Adam. On some level, he did not recognize the great good that Hashem had given him in “that woman,” his helpmate. Had he fully recognized the good, he would have felt an overwhelming sense of appreciation, which would have prevented him from saying the words, “That woman that you gave to help me…” Those words came out because, to some extent, he failed to recognize how good she was for him, and therefore he was able to blame her. Had he been fully cognizant of the good, the natural sense of appreciation would have prevented him from making such a statement.

This concept has great ramification in our lives. Our service to Hashem should be powered by a tremendous sense of appreciation for the good bestowed upon us. Many of our interpersonal relationships are dramatically weakened because we fail to remember the great good that has been bestowed upon us – by our parents, by our spouses. Ultimately, our lives become so much richer and more enjoyable when we train ourselves to focus on and recognize the good. Our natural sense of appreciation and a desire to pay back the good then wells up within our hearts.

The solution is to take stock, to compare ourselves to others less fortunate, and to recognize the blessings and the good given to us. Once we do that, our natural sense of appreciation flows from our hearts and changes the way we think and act. 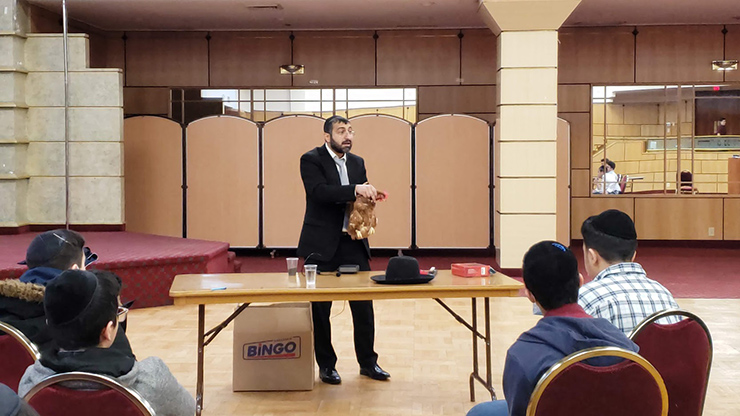