On Monday evening, June 17, community women gathered at Congregation Ahavas Yisroel to hear an inspiring shiur by Rebbetzin Tziporah Heller, well-known lecturer and author, on the subject of responding to anti-Semitism.

Rebbetzin Heller began her shiur by exploring the roots of anti-Semitism, which began back in the Garden of Eden. She pointed out that fruit grows from the outside and then the inside grows. Similarly, Hashem created the world with forces of evil as the backdrop. The snake tried to influence us to cleave to an egotistical life. The snake wanted to create doubt. The Hebrew word for “snake,” nachash, has the same g’matria as “Mashiach.” She explained that the Mashiach will come from meeting and dealing with doubt. She shared an allegory of the Arizal. There was once a king who had a son, and the king wanted to test him. He told a concubine to seduce the son, but the concubine loved the king more than the son. According to the Zohar, she accepted the mission but wanted to fail. Her moment of failure was a moment of triumph for her. In the same way, the yeitzer ha’ra wants to be defeated. Forces of evil went into our hearts after the sin in the Garden of Eden.

Sinning continued through the generation of Noach, and Hashem said, “My spirit doesn’t rest in humans anymore. They only know their desires.” So He brought the flood. She then pointed out the differences between Noach’s three sons. Shem was repulsed by evil because it was wrong. Yefes was repulsed because it was ugly, and Cham was the one who uncovered his father. Cham’s descendants would be slaves to slaves. She taught that a life of self-gratification means no mastery of self. Yefes received beauty, and his descendants would love beauty. Shem, who saw right and wrong, was where Hashem would dwell.

She then spoke about Yaakov and Eisav. According to the Alshich, Eisav takes in the world while Yaakov can be exposed to the world but stays like himself. “So, what’s the difference between Eisav and Yaakov? For Eisav, this world will always be his primary world. He wants meaning and purpose in this world. Yaakov wants to live a purposeful life and fix the world. He is rectifying the world because it’s a means of obtaining the Next World.

She shared a true story about Rav Hutner zt”l. After the ordeal of being on an aircraft that was highjacked to Jordon for close to two weeks, the pilot wrote him a letter. He said, “You were considerate of others and didn’t panic. I want to be like you. I see you come from an ethical system. Do you think I should convert to Judaism?” Rav Hutner responded that he shouldn’t convert. You have to be a pilot and acknowledge G-d. Enjoy the world but bear in mind that there’s something higher.

She explained that Eisav felt satisfaction when he conquered people. Eisav’s mentality was to kill again and again. He wanted to eradicate other cultures. Hunting gave him a feeling of dominance.

Eisav’s characteristic is they are well-spoken. She pointed out, “Look at political speeches and literature.” No one grasped who he was except Yaakov. Eisav hunted women and performed idol worship. She then asked, “So why did Yitzchak favor Eisav?” One view is that he had some idea who Eisav was, but he thought that if Eisav could be turned around, he would be like the son in the parable who says no to the concubine. He was invested in Eisav, but Rivkah knew the truth.

The blessings that Yitzchak offered were all physical blessings, because Yaakov needs the physical world to give expression to the “anochi.” The hatred Eisav has for us through all time comes because we ended up with the brachah. Yaakov had to run away from Eisav, and this tells us that we will be forced many times to run away for our lives. Just as Yaakov prospered with Rachel and Leah, we too will prosper.

Rebbetzin Heller reviewed Yaakov’s response when he heard that Eisav was chasing him with an army of 400 men. He prayed, he tried appeasement, and he prepared for war. She pointed out that Eisav came back at this point because he knew that Yaakov was coming back, so now he had something to fight about. The first step in the encounter with Eisav is t’filah – asking Hashem’s mercy, saying “I depend on Your promise to protect me.” We have to realize that we can’t control Hashem with t’filah. T’filah is meant to express the idea that “I rely on You. I have nothing. You have everything.”

She noted how Yaakov bowed seven times to Eisav. This appealed to Eisav’s gaavah. Gaavah, she said, is not a Jewish value. It destroys you from inside. Eisav went to Har Sei’ir, which is the mountain of hair. It continually takes everything in.

She explained that there are two types of Jew-hatred. There is hatred of us as a minority, and there is hatred because we are different.

Rebbetzin Heller taught that the Romans liked Christianity because they could have the feeling of spirituality without having to follow any commandments. Edom is compared to the pig, which sticks out its feet and says its kosher (because it has split hooves). But on the inside it is treif (because it does not chew its cud). This is why Eisav’s head is buried at the Cave of Machpelah. He served only with his intellect, not his heart. Eisav seeks to destroy us from the inside. They see us as a rival.

Modern anti-Semitism says Jews dominate banks, politics, and media. We are disproportionate. We are only one percent of the American population, but in these areas you see us. This is why we are hated. They think we took what is theirs.

She then explained how the Avos were called sheep. They said they would follow.

“We are part of the problem,” she stated. “If we neglect our vineyard and tend their vineyard, then they will hate us.”

She explained that they hate us because we dominate, and this is because we are tending their vineyards. She added: In history, the more successful our assimilation, the more successful was the attempt at our annihilation. “We have to learn from the Avos and the Imahos and do not identify with other cultures. Teach our children to follow the example of the Avos. Stop guarding other people’s vineyards.” She emphasized, “Re-establish your identity and be willing to humble yourself.”

She mentioned a teaching of the S’forno. He saw that mansions and ostentation made goyim jealous. “Do everything you can in order not to provoke the enemy. Follow the Avos, she reiterated. “Be Jewish.” Don’t let people think that you are taking their ideas. “The more we assimilate, the more hated we are. Establish your own identity. Begin in a serious way.”

The shiur ended with a lively question-and-answer session. 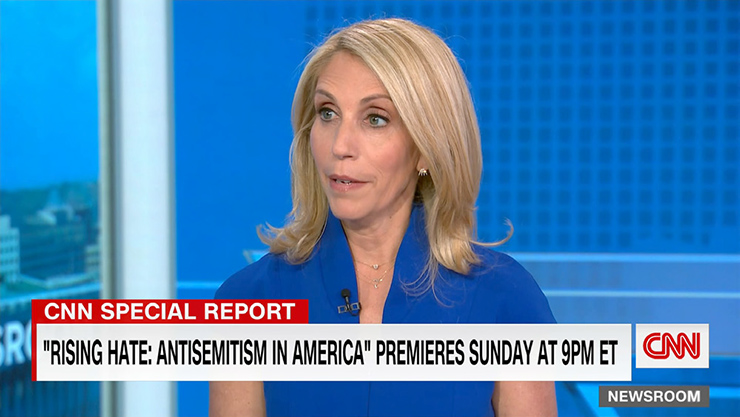 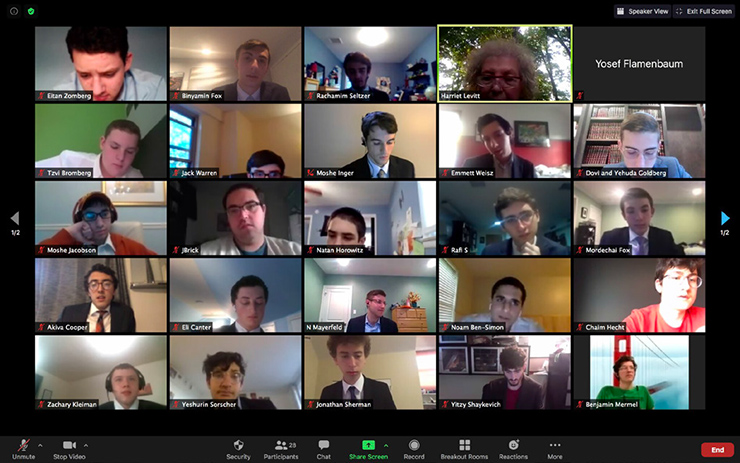 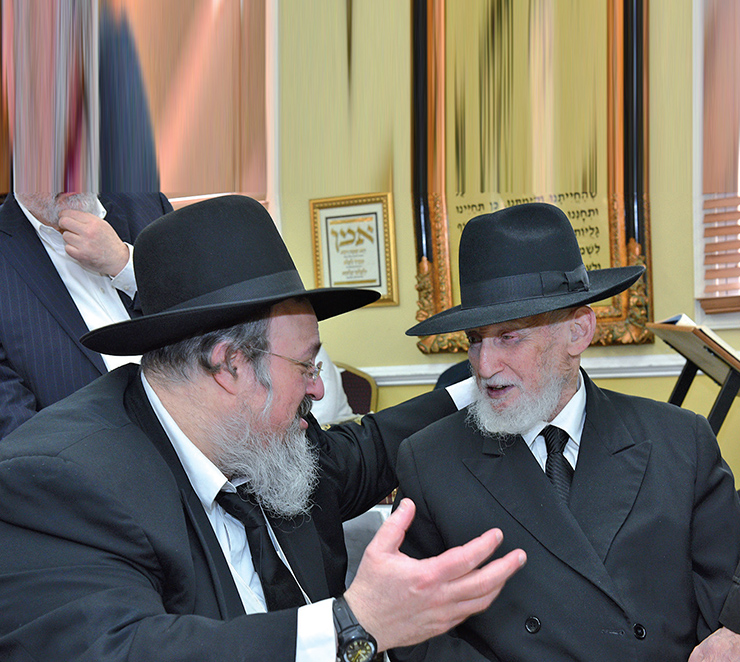 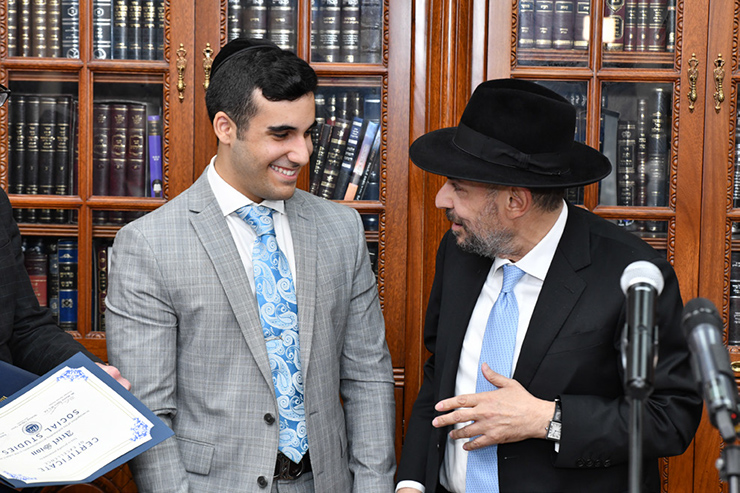