During this past week, over 100 different fires were started in Jewish communities near the Gaza border. Please read these three quotes – from three different media sources – on three different days – from last week:

YNET: “On Thursday, 19 fires broke out on the Gaza border due to incendiary balloons sent from the Gaza Strip. Most of the fires broke out in the Shaar HaNegev and Eshkol regional councils.”

The Jewish Press: “Hamas terrorists started 14 fires in southern Israel on Friday with the launch of more incendiary balloons.”

Those quotes are from Wednesday, Thursday, and Friday of last week, when 52 fires were started! These are in addition to the hundreds of fires started each week for the last several months! Can you imagine the pain and suffering of those poor Jews living there? Can you imagine the damage caused to fields, homes, and daily lives to our brethren? Unfortunately, many people will ask; “Well, what are they doing there? Tell those Jews to move to Netanya or Ramat Beit Shemesh.” My answer to that question is very simple: You get rid of the people starting the fires, not the ones suffering the damage! 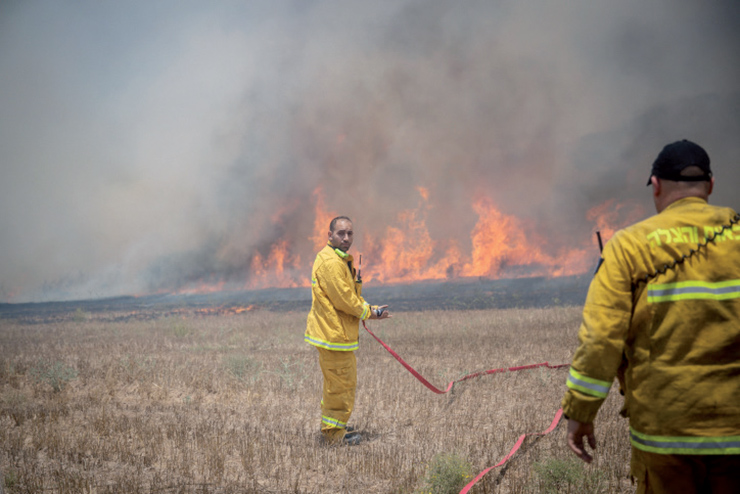 What makes matters even worse, however, is that the fuel used to start these fires is sent through the State of Israel into Gaza! A little less than a year ago, the United Nations worked out a one-sided truce, where Israel allows the delivery of fuel into Gaza. The Gulf state of Qatar pays for this fuel, and it was meant to help the residents of Gaza with their electricity. Up until the one-sided truce, electricity was supplied to Gaza residents just six hours a day, and now there is electricity for 12 hours a day. The reason I keep writing “one-sided truce” is because the deal included a total ceasefire between the IDF and Hamas. Since the time of this deal, Israel has not shot one bullet into Gaza, but Hamas has fired over 500 rockets and sent in close to 1,000 balloon bombs. Yes, the truce is “one-sided,” and we keep allowing the transfer of this fuel into the Gaza Strip.

A recent interview on Israeli TV of the residents of the Jewish communities living in these areas was hard for me to watch. The people spoke of difficulty breathing, itchy eyes, and scared children. Farmers literally cried as they spoke of watching their fields burn before their eyes. Firefighters said that they cannot keep up with the workload and that they are collapsing due to the conditions and extreme summer heat.

What do our Torah sources say about this? After all, these balloons are designed to cause property damage, not kill people, so what should our response be? The Talmud in Eruvim (45a) is very clear: “In the case of an attack on a city close to the border of a Jewish area, even if they (the enemy) did not come over a matter of lives but only over a matter of straw and stubble – which are not worth much money – we may go out against them with our weapons and violate the Shabbos” (translation and commentary by ArtScroll).

It must be noted that as an initial example, the Talmud states that “Babylon is like a city close by the border – and it may be defended on Shabbos even against a raid to seize money,” because it is near the Jewish city of Nehardea. So, dearest friends, if the Talmud was worried about what would happen to the Jews of Nehardea, if the enemy seized property in Babylon, how much more must we be concerned about cities in Israel such as Beersheba and Ashkelon if the heroic Jews in Shaar HaNegev move away and abandon their homes and fields. Therefore, don’t shame yourselves by asking, “Why don’t they just move elsewhere?” Rather, we must help these Yidden in every way possible, and the Israeli government must send in the holy IDF soldiers to permanently end the threat of terror to these communities.

Fox News is 100 percent right when they call these “balloon bombs,” and therefore every one of them is an act of war. International law allows for a country to properly defend itself against an act of war, and the Torah permits it, as well, as we have seen above. The amazing and heroic Jews who live in these communities must know that the IDF will unleash all of its G-d-given power against the enemy. We cannot and we will not tolerate these acts of terror.

Let’s all pray that Hashem sends us people who will lead the State of Israel with these values. New elections are coming to Israel in mid-September, and it is my hope that the Zehut party – whose position is to conquer Gaza and make it an integral part of the State of Israel – will be elected to the Knesset. I promise you that when that happens, we will do everything we can to make sure that Jews no longer live in fear. On the contrary! We will build, grow, and expand Eretz Yisrael and make it as easy as possible for every Jew in the world to come home. And one more thing: The only fires in the country will be the ones cooking delicious burgers and steaks on the grill! Jewish lives and Jewish property must never be in danger again!

Someone Wrote In This One!