Last Wednesday and Thursday, May 22 and 23, the Yeshiva Tiferes Moshe Eighth Grade class journeyed to Washington, DC, a final opportunity to bond with rebbeim and friends before graduation and moving on to the next stage in their lives.

After an early Shacharis, the group boarded the bus and headed for Baltimore. Their first stop was a private tour of Camden Yards, home of the Baltimore Orioles. They continued on to Washington, DC, for a visit to the United States Holocaust Memorial Museum. Next was a much-enjoyed experience at the brand new Spy Musuem. Supper was next – at Eli’s Char Bar. Finally, they checked into their College Park hotel and enjoyed a swim in the reserved pool. 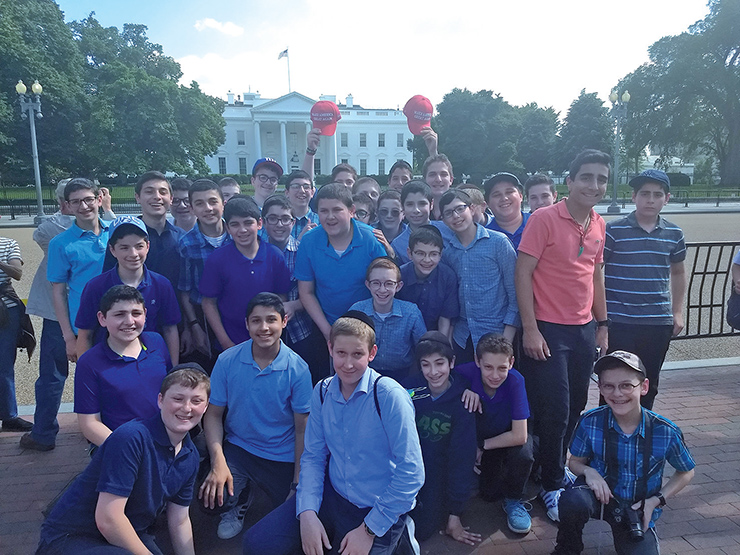 The next morning, the group davened Shacharis, ate a hot buffet breakfast, and learned with their rebbeim at the University of Maryland Hillel before returning to Washington. Thursday’s first stop was an upscale souvenir shop in order to purchase mementos for themselves and their families. The Newseum, with all of its interactive exhibits, was the next stop. Then, straight to the Smithsonian’s National Air and Space Museum, where they viewed a fascinating 3D Imax about aircraft carriers. The boys also strolled around the museum and spent time in its extensive gift shop.

Exiting the museum, they were greeted with fresh pizza, delivered from Silver Spring, which they enjoyed on the Mall. They had the opportunity to take photos at the Capitol and at the White House. Then it was back to the Hillel in College Park for a hearty supper and Minchah before heading back to Yeshiva.

Thank you to Rabbi May, Rabbi Sklar, and Rabbi Becker for their hard work chaperoning the trip, and their families for allowing them to go. Thank you to Mrs. Nissanov (the Eighth Grade adviser) and Mrs. Goldish for their efforts to make the trip a success.