As you all know, in Israel the army is not voluntary; most young Israeli men and women serve in the IDF, although there are many notable exceptions.  Any soldier in any army faces many challenges.

In addition to having to fulfill grueling physical demands, he must learn to take orders, adjust to strict discipline, and live on an extremely tight schedule with almost no control of personal time - all far away from the comfort of home and his loving family. Besides all of these adjustments, a religious soldier faces many additional difficulties, namely leaving the cocoon of his religious environment, which encourages learning and nurtures growth, and entering an alternate environment with soldiers from diverse walks of life, and an atmosphere not highly conducive towards religious development.  Years ago, it was unfortunately all too common for a soldier to enlist in the army proudly wearing his kippah, and leave bareheaded upon his discharge.  This phenomenon still exists today but it is much less common, thanks to various support systems that have been put into place.  One very successful support system, founded by HaRav Peretz Einhorn, is called Tzalash, an acronym derived from the initial letters of Tzava L’shem Shamayim, Army for the sake of Heaven. 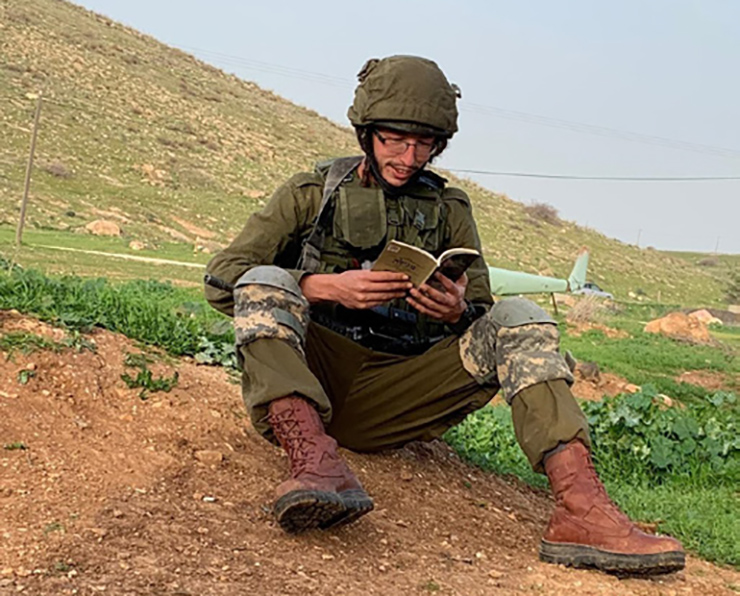 Many religious chayalim live somewhat insulated lives before joining the army, which for some is their first exposure to people significantly different from themselves (irreligious, non-Jewish, etc.).  This is no simple matter. They are suddenly subjected to immodestly-dressed women, inappropriate music, crude language, and other influences that can negatively impact their spiritual health.

Special arrangements and programs have been created over the years to accommodate religious chayalim. Boys can study in Yeshivot Hesder programs, which combine Torah study along with army service in units designated for observant men. In more recent years, a unit was created for soldiers from a Chareidi background.  Pre-military academies (mechinot) have also been established in order to strengthen the boys spiritually and prepare them for the challenges they will encounter in the army. Once in the army, religious soldiers can obtain approval to have a beard and are given time to daven three times a day. Only kosher food is served to all soldiers in the IDF, so that’s generally not an issue.

But even with these accommodations, the time the boys spend out of their strictly religious framework continues to be very challenging on a spiritual and emotional level.  In yeshiva, their religious identity is fueled by their learning.  As chayalim, too exhausted to learn during their limited free time, they may begin to see themselves less as yeshiva boys and consequently, become more vulnerable. Rav Einhorn recognizes this conundrum and devotes his days and nights providing spiritual and emotional support to his chayalim. I was privileged to speak with Rav Einhorn about his organization and found him to be not just passionate about his mission.  The man is absolutely on fire.  He firmly believes that not only can a soldier get through the army without falling to a lower religious level, but with the proper support his religious convictions can even be strengthened.

After Rav Einhorn was discharged from the army, he returned to the mechinah in Atzmona where he had learned previously, and was put in charge of the students of the mechinah who were serving at the time.  He found that not only did the boys need his support, they thirsted for it.  Consequently, at the end of 2012, Tzalash was born.  Tzalash’s purpose is to look after the spiritual and emotional needs of religious soldiers and provides them with a comprehensive range of programing throughout their service. 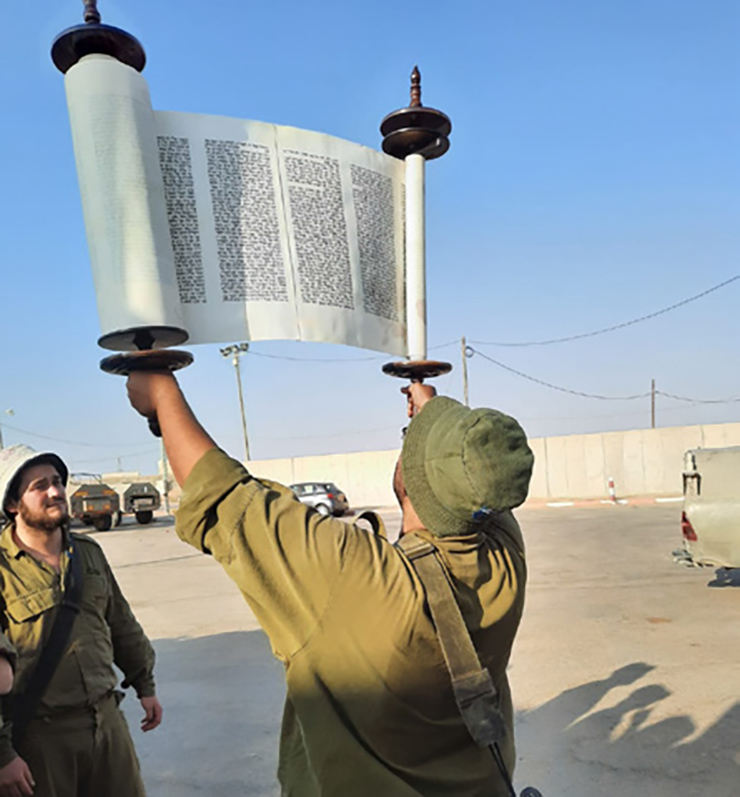 The staff of Tzalash visit the boys in their yeshivot and mechinot even before they enter the army.  They hand out pocket-sized editions of the Mishna and Gemara, customized to fit into the pockets of their uniforms, and encourage each boy to study his part.  The boys already make a siyum at the enlistment center in the presence of their parents on the day they join the army.  Full-day preparatory conferences feature lectures delivered by Chief Rabbis, Roshei Yeshivah, senior members of the army rabbinate, and Tzalash staff about halachot related to army service, as well as inspirational speeches about the mitzvah of defending the Jewish land and its people.  The conferences culminate with a siyum, seudah, and celebratory concert.  Rav Einhorn believes that Torah study motivates the boys to be better soldiers.  Tzalash has sponsored over 4,200 siyumim in army bases across the country, including a siyum made over Zoom when a school from abroad shared the learning of a masechet with an army unit.

On Shabbos, Tzalash sponsors kidushim and onegs with food and Torah study, transforming a day of rest into a day of growth. Soldiers who aren’t religious often join the festivities, which open their hearts and ignite a spark in them as well.  Tzalash has made Bar Mitzvahs for nineteen-year-old boys who never had one.  Tens of soldiers become religious each year as they are inspired by the learning and simchah they experience on their bases.  On Sunday mornings, soldiers who were off-duty over Shabbos meet at central locations throughout the country.  While they wait for their buses to return them to their bases, Tzalash provides a light breakfast reception along with shiurim, divrei chizuk, and singing.  This uplifting experience fortifies the boys for the week ahead.

Through a program called “Eishet Chayil,” Tzalash connects the wives of chayalim currently serving to each other and provides them with much needed emotional and religious support. After one conference geared towards these women, one wife stated that she received so much chizuk that, for the first time, she didn’t cry when her husband left home to return to his base.

The staff members of Tzalash visit the soldiers and avail themselves by telephone as much as possible to discuss any issues the boys may be struggling with.  One of Rav Einhorn’s most rewarding parts of his work is when he receives phone calls in the middle of the night from soldiers who need a listening ear. In his shiurim, he encourages the boys to be alert to the needs of their fellow chayalim as well as their families. He tells them to look out for soldiers who may be having difficulties and to bring their mothers flowers whenever they return home for shabbos. One chayal took this lesson to heart. He was on a seven-minute bathroom break when he suddenly he heard crying coming from the next stall. At first, he thought to return to his unit anyway, but then he remembered what Rav Einhorn had taught and decided to help the soldier, even if he might be punished for taking more than his allotted time. He called to the chayal, but got no answer - just more crying.  He climbed up and looked over the door and was shocked to see that the soldier was about to take his own life. He immediately jumped over and prevented the worst from happening. Then he made sure that the soldier received the help he needed to overcome the crisis he was in. He literally saved the boy’s life.

Tzalash has experienced tremendous growth recently and invited HaRav Dovid Gottleib to join its team as its new director. HaRav Gottleib, formerly the rabbi of Congregation Shomrei Emunah in Baltimore prior to making Aliyah in 2010, is currently the rav of Kehillat Ha’ela in Ramat Beit Shemesh, and had until recently been working as a full-time rav in Yeshivat Har Etzion. When I was privileged to speak with Rav Gottleib, I asked what motivated him to cut back his hours at the yeshivah in order to take on his new role at Tzalash.  Rav Gottleib explained that when his son served in the army, his eyes were opened to the challenges faced by these yeshiva boys.  He also saw firsthand how Tzalash provides the answer to that challenge.  Rav Gottleib feels honored to be part of this organization. 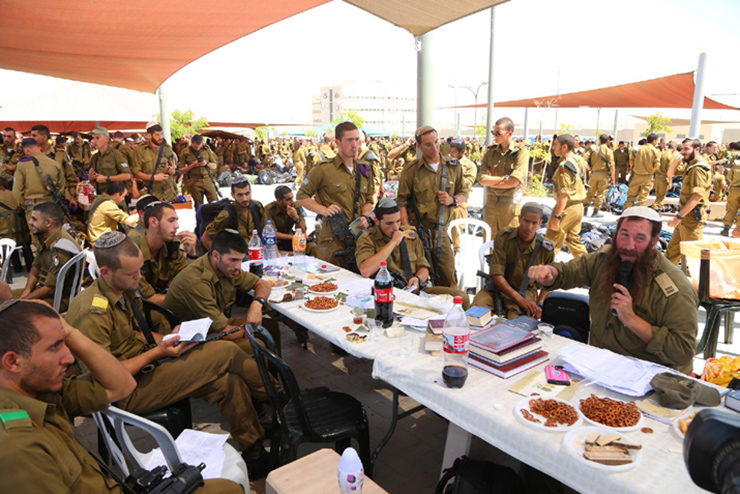 Rav Einhorn’s passion and enthusiasm are contagious.  As he speaks, his concern for each of the thousands of soldiers in his program shines through.  I can barely keep up with all of the activities he describes.  As far as Rav Einhorn is concerned, this is just the beginning of the road.  He has many dreams for the future: having communities abroad adopt an army unit, programing for lone soldiers, and a hotline staffed by mental health professionals. The list goes on.

The word Tzalash is also an anacronym for “Tziyun l’shevach,” an award given to a soldier for an act of heroism or an extraordinary contribution above and beyond normal expectations.  It seems that Rav Peretz Einhorn, the founder of Tzalash, and his staff, are indeed deserving of a Tzalash!