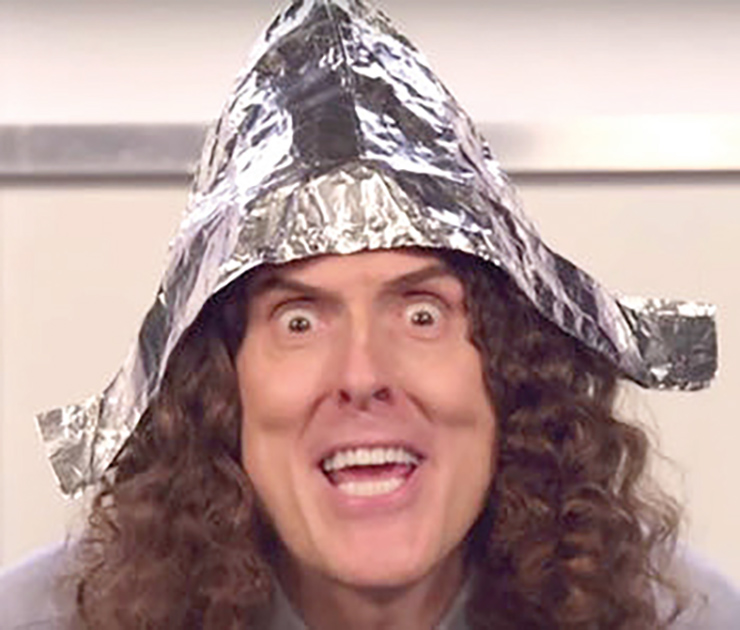 Picture a conspiracy theorist in your mind. You’re probably thinking of some crazed individual ranting about government coverups, international cabals, and alien landings. You would be forgiven for thinking that all conspiracy theories produce the tin-hat-wearers referenced by “Weird Al” Yankovic in his song “Foil.” In fact, most of the more famous conspiracy theories do produce the wild accusations wherein there would have to be such a large number of people in on the plot that by now one would have come forward. And you know these theories already: The JFK assassination and 9/11 were inside jobs; there are aliens in Area 51 in Nevada; the moon landing was faked. The list is pretty comprehensive, and almost always include the phrase, “a vast government coverup.” And you have every right to question the sanity of people who raise and propagate these insane ideas.

But what is a conspiracy theory really? It’s an idea that attempts to explain how real-life events are not what they seem, and are actually perpetuated by a powerful group of people in order to hide the truth from the general public. But the key to these theories is that they usually lack any actual evidence to support the veracity of the claims. Any “proof” offered is usually some mildly-troubling statement that ends with, “well how do you explain that!?” When you look at Area 51 on Google Maps, it’s grayed out. How do you explain that? The path of the bullet that struck JFK could not have been fired from a sixth-story window because of the exit trajectory. How do you explain that? There’s no wind on the moon yet the flag was blowing. How do you explain that?

When someone brings up these theories, the right thing to do is laugh them off and ignore the rest of their points. Still, there is real danger in conspiracy theories. What happens when conspiracy theories are accepted by the general public? What happens when baseless accusations have real-life consequences? The basis of the Holocaust was a conspiracy theory that was widely accepted as fact by millions of people in Europe in the 1930s. You don’t want to go back that far? How many people refuse to vaccinate their children because of some vast conspiracy perpetuated by the pharmaceutical industry in collaboration with the FDA, the CDC, the DOH, the AMA, and any number of other agencies and organizations? Well, the result was a measles outbreak in 2018. As any conspiracy theory gets stronger, it can have dire implications.

This is especially true when the government itself gets behind these theories. Case in point: President Trump. The President has subscribed to a vast interstate conspiracy to throw him out of office against the will of the American people. He does this despite no evidence existing of voter fraud - at least no fraud to the levels anywhere close to have any effect on the election results. In doing so, he fundamentally alters the trust many Americans have in the efficacy of our elections. This has the potential for real-world implications. If enough people don’t believe that elections are fair, at the very least, they may decide to stay home come election day. By the time you read this, we could have already seen this play out as early as the election held this week in Georgia. But this is a game we play every election. People tend to be less inclined to believe their candidate lost without unfair interference. Before the 2016 election, people were up in arms about Donald Trump announcing that he would not necessarily accept the results of the election, only to have Hillary Clinton delay her concession speech (not nearly as long as long as Trump has, but delayed it was, nonetheless).

The effect on the population is predictable. In 2016, the Washington Post reported that a third of Clinton supporters claimed that Trump was elected illegitimately. Last year, a morning consult report showed that Republican trust in the elections dropped from 70% in September to 30% in December. At the same time, Democratic trust rose from 62% to 80%. There is no question that had the results of the election been different, the trust breakdown would have followed suit.

While trust in elections isn’t a one-sided problem, the reason for the lack of trust certainly is. Republicans are more likely to believe in a rigged system, where votes aren’t being counted, technology has been altered to favor one party (but only in states where their candidate lost for some reason), and representatives are barred from observing the vote count. Democrats are more likely to believe in voter suppression – where voters, usually minority voters, are being disqualified from voting. Despite there being scant evidence for either of these claims, people on either side of the aisle have adopted their side’s claims as fact and the other side’s as fiction. In fact, if you are a hyper-partisan reading these examples, there is a good chance that you’ve already dismissed the other side’s complaints and reaffirmed your own. You probably think I’m a goober for not believing your side, but I’m totally correct in dismissing the other side.

Election results aren’t the only conspiracy theories that have come to be accepted by the general public. The gender pay gap is a conspiracy theory so widely accepted that it has its own day sometime in March or April. Equal Pay Day is supposedly the day that a woman would have had to work up until to earn the same amount as a man the previous year. The way this is calculated is by dividing the total amount earned by men in a given year by that earned by women in the same year. The difference in percentage is how much more a man earns than a woman. Without considering any other variables, this has developed into the concept of men earn X% more for doing the same work. The actual calculation doesn’t compare same work; it compares total earnings. Yet somehow, this has become widely accepted as fact.

Police brutality against black people is another conspiracy theory that has become accepted among large swaths of people without regard for fact. It ignores FBI crime statistics. It ignores police brutality against white people. All individuals see when it comes to police brutality - and in fact in all conspiracy theories - are a handful of incidents or one basic statistic, and they think they have cracked the code. They know more than everyone else. This one thing proves my whole case, and if you don’t agree with me, you have bought what they’re selling. The truth is, if you’re that quick to find a statistic that happens to agree with your preconceived notions, then you are the one falling for the trick. You are buying what the theorist is selling - hook, line, and sinker. You might as well invest in that tinfoil hat, which is nice because it matches everything you own anyway.