There are no words to describe the mission, along with the feelings of elevated hisorerus and chizzuk. But, as the purpose of the mission was to be mechazek limud haTorah across the globe, I try my best to find the words to spread the chizuk haTorah created last week.

Although the words “historic” and “unprecedented” lost their credibility, thrown into news items like the wind-swept snow in the frigid streets of Vilna, I am confident that this time, those words are true. The Dirshu Mission to Vilna and Siyum celebration of the second cycle of Daf HaYomi B’Halacha, was truly historic and unprecedented.

Vilna - the magical city which until now held secrets locked away in the vaults of history, visible only in the imaginations of those who study, learn, and toil to understand the words of its guiding sages, the “Yerushalayim d’Lita”, upon whose streets walked the great Gaon and tzaddik likened to “the Rashba and maybe the Ramban,” whose talmid HaGaon HaRav Chaim Volozhiner, the “Av Hayeshivos,” paved the way for Torah to flourish again,

Vilna, which after 80 years in mourning and solitude, has returned to life - welcoming kavod haTorah once again.

The Dirshu Mission was not only a kibbutz galios of two hundred members of the Dirshu family converged to celebrate limud, ameilus, and chizzuk in Torah.

The words of HaGaon HaRav Eliezer Yehuda Finkel, shlit”a, Rosh Yeshiva Mir, expressed what everyone felt. “When the Bnei Yisrael went to be Oleh L’Regel, it looked exactly as it looks tonight.  From Paris, Bnei Brak, New York, Leon, Gibraltar, and Marseilles, each one here is a special yochid, each with his own melody, with his piyyut, with his own path to hatzlocha, and each one a part in the greater tzibbur with Achdus. 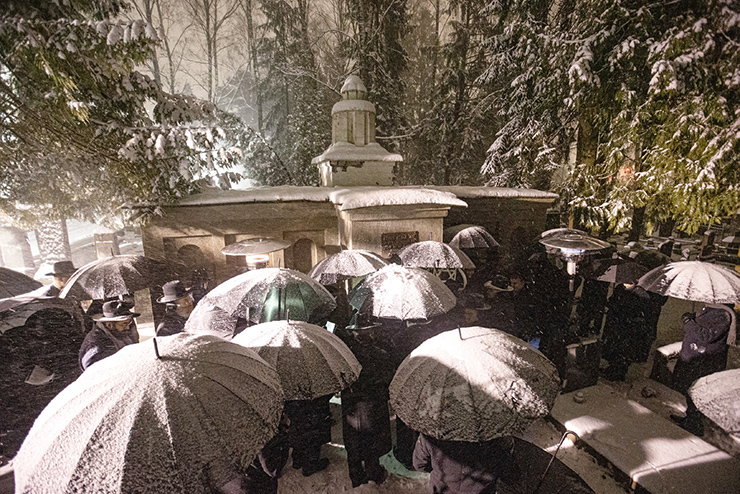 Dirshu’s mission is to promote, sustain, and facilitate limud and ameilus baHatorah. The brainchild of Rav Dovid Hofstedter, under the guidance of Gedolei Yisrael across the spectrum, Dirshu’s approach to create a daily learning regimen, with review and accountability, revolutionized Limud Hatorah and Halacha for thousands of bochurim, yungerleit and baalei battim. With Siyatta dishmaya, Dirshu has seen unprecedented growth in the twenty years since its founding.

“The Mishnah Berurah began right here in Vilna.” The Chevron Rosh Yeshiva, HaGaon HaRav Dovid Cohen, shlit”a explained. “The Chofetz Chaim writes in the hakdama that after he reviewed all the poskim, his psak is like the Gr”a, the light of Yisrael, and the foundation which everyone relies on.

“Reb Chaim Volozhiner founded all of our yeshivos – here in Vilna. This city is the source of the Torah of our generation!”

The mission began as the Gedolei Torah and Lomdei Torah from all sects of klal Yisrael stepped off the buses in downtown Vilna, and inhaled the air, saturated with Torah for six centuries.

After checking into the five-star Kempinski Hotel, and receiving a warm welcome from Gedolei Yisrael, uniting with their “Dirshu Family” from across the globe, making each guest feel at home, the group set out to the first destination - The Paneriai Forest.

Rav Eliezer Ralbag shlit”a, Rav of Lakewood Courtyard, addressed the gathered, “Here, a makom kadosh where over 75,000 yidden from all over Europe, including the Marcheshes zt”l Hy”d, and HaGaon HaRav Boruch Ber’s Rebbitzen and sister-in-law and nieces and nephews, were murdered.

“The simple vasser treggers of Vilna were meleiim mitzvos k’rimon, and they were stuffed in wagons and brought here to be shot and buried - many of them buried alive.

The oilem was stirred by their words and used the opportunity to be mispallel for their needs in the zchus of the kedoshim.

Amid falling snow and freezing winds, HaRav Uziel Leibowitz, shlit”a, Rosh Mesivta Birchas Shmuel, and great-grandson of Rav Boruch Ber zt”l, spoke passionately about Rav Boruch Ber’s impact on the oilam hayeshivos, evoking the koach and opportunity those gathered had to be mispallel at the kever.

At the next stop, a visit to the Choral Synagogue of Vilna, Rabbi Mordechai Neugroschel, international historian and lecturer who served as a tour guide and darshan over Shabbos, said divrei zikaron about the community of Vilna.

Maamad Tefillah at Kever of the Vilna Gaon

The American and European groups then set out to the kever of the Gr”a, and the group from Eretz Yisrael traveled across the Belarus border to Radin.

Rav Dovid Hofstedter welcomed the oilam in the freezing cold and falling snow, and set the tone for the maamad. “There are so many yidden whose lives are bitter. Let us be mispallel for them – that they too should taste the sweet waters of Torah!”

HaGaon HaRav Dovid Cohen shlit”a, his voice amplified by the pre-set sound system, and his face aglow, began. “The Gra is an integral part of the chain of our mesorah of Torah from Moshe Rabbeinu.

“The Gaon was a kol gadol v’lo yasaf! The Gra’s Torah never stopped!”

The tefillos at that site were indescribable. The emotional and tearful Tehillim, slichos, and yud gimmel middos resembled Nei’lah of Yom Kippur. The tangible aura of kedusha of the time and place was unparalleled. The tefillos continued at the kevorim of HaGaon HaRav Chaim Ozer and HaGaon HaRav Itzele Ponovezher zt”l, among other Gedolei Yisrael.

Meanwhile, the group from Eretz Yisrael’s bus climbed the hills leading to Radin, passing old wooden houses adorning the landscape, until it reached the kever of the Meir Einei Yisrael, the Chofetz Chaim zt”l.

The excitement continued as they placed the “Sefer Hagiborim,” in which was listed the names of the newest members of “Daf HaYomi B’Halacha, on the kever of the saintly Chofetz Chaim.

The simcha continued with a seudas mitzvah in Yeshivas Radin, after which the group returned to Vilna, arriving after daybreak.

The dark Friday morning sky saw the return of the group, embarking the buses before dawn, setting out to Kovna. Rabbi Moshe Scheinfeld, Rav of the Moadon Yehudi (Jewish Center) of Kovna, greeted the large group into his shul, and joined the group for breakfast afterwards.

The buses then traveled to one of the most heart wrenching sites in Eastern Europe, where the akeida of HaGaon HaRav Elchonon Wasserman zt”l Hy”d and others took place – the infamous “Seventh Fort.”

Before entering the Soviet built fort, HaGaon HaRav Nissim Kaplan shlit”a, Rosh Yeshivas Daas Ahron in Yerushalayim, gave a gripping shmuz. “We are all willing to jump into a fire for kiddush Hashem. But with Hashem’s continued help, we won’t have those opportunities! But do we wake up early every day? Do we make zman krias shema? How can we enter this makom kadosh without some mesiras nefesh of our own to be metzaref with the mesiras nefesh of the heilige Reb Elchonon!”  The group entered the mokom kadosh with a renewed chizzuk.

Demonstration in honor of Kivrei Yisrael

The entire delegation, including the group who had returned from Radin only an hour prior, reunited to demonstrate in the Vilna “Shnípishok” Cemetery, where the local government is planning to build an office and shopping center. HaGaon HaRav Sariel Rosenberg, shlit”a began the demonstration with Tehillim, followed by Rabbi Reuven Ohana, Chief Rabbi of Marseille, France, and member of the European Coalition of Rabbis, who addressed the assembled. 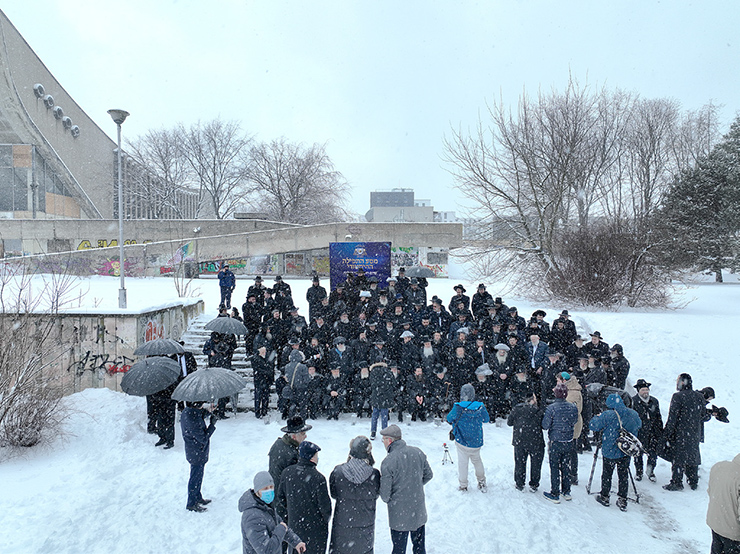 An Uplifting Shabbos in Vilna

The seudos were a continuation of the regesh and achdus of the Shabbos. In a spontaneous moment during Shabbos zemiros, HaRav Shimon Galei stood on a chair, and full of emotion and dveikus, led the oilam in zmiros. HaRav Dovid Cohen, HaRav Eliezer Yehuda Finkel, and other gedolei Roshei Yeshivos all joined Zanvil Weinberger and the Malchus Choir, singing and enjoying the kedusha of Shabbos, reflecting the purity and caliber of the highest levels of ameilus batorah contained within the room.

A Visit to the Home of The Vilna Gaon

After the Seudah, a small group led by HaRav Nissim Kaplan, Rav Shlomo Cynamon and Rav Eliezer Ralbag walked only a few hundred yards to the home of the Vilna Gaon, where the Rabbonim told over the story of the “Ger Tzedek of Vilna,” Avraham ben Avraham, and his last conversation with the Gaon. They then each said over a chidush b’inyna mesiras nefesh al Kiddush Hashem.

On Motzei Shabbos, after a meeting of Rabbonim and magidei shiur from across the world, led by Rabbi Shlomo Rozenstein and Rabbi Avigdor Bernstein, directors of Dirshu Eretz Yisrael, the Siyum began.

The excitement built up as Rav Dovid Hofstedter addressed the crowd one last time. He spoke emotionally, describing how each makom kadosh visited over the past three days was filled with the blood of tzaddikim from the past, but “The only way we can overcome, is through the koach of Torah! We have the power to strengthen our limud HaTorah, and to increase lomdim throughout the world!”

HaGaon HaRav Finkel spoke emotionally as well, thanking Hashem for the past nissim which allowed the Mosorah of Torah to continue. 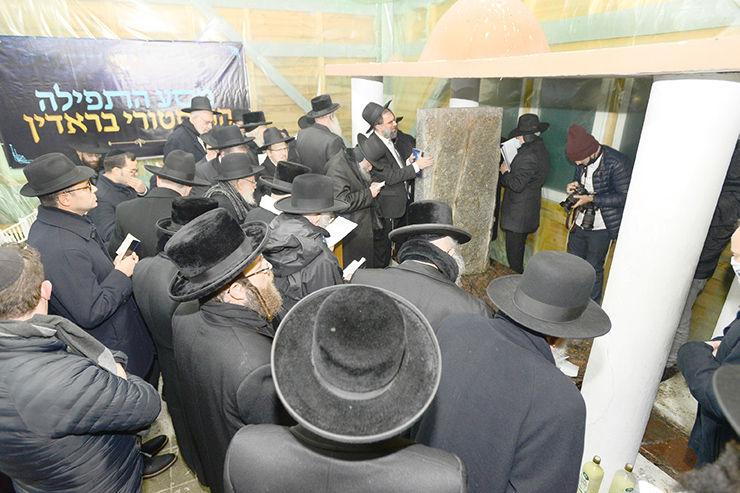 “Many think that to be mekadesh shem shomayim, you need money, charisma, or connections. This is a mistake! One can fill his tachlis by sitting by himself and learning in a beis medrash and his word will spread from one end of the world to another!”

The rest Hashem takes care of! Everything is siyatta dishmaya!”

The evening and the Shabbos winded down, but not without leaving everyone with an unforgettable and uplifting experience. The friendships made, chidushim exchanged, and chizzuk derived will be life lasting. But the tefillos at mekomos hakdoshim, and the hashpa’ah from spending three days basking in the presence of Gedolei Yisrael was life changing.

The words from the final drasha of HaGaon HaRav Dovid Cohen shlit”a will remain forever in the hearts and minds of those fortunate to hear - “One who is mekadesh shem shomayim by being lomed al mnas laasos, is ‘miskadesh bikedusha elyonah!’

“This is how we become a mamleches Kohanim v’goy kadosh! – and this is Dirshu!”