The media was abuzz this week with the arrest of Jordan Burnette and the 42 charges he was hit with for vandalizing synagogues throughout the Riverdale section of the Bronx. But much of the coverage missed the fact that New York’s bail reform laws sent the suspect right back onto our very streets, leaving New York essentially out of control.

Four synagogues were vandalized, some multiple times, with smashed windows and swiped prayer books and hand sanitizer dumped on these holy s’farim during an 11-day crime spree in the Riverdale section of the Bronx, striking fear and intimidation in the hearts of residents throughout Riverdale and the Greater New York City area.

According to WABC, police officers were on patrol around 3 a.m. on Saturday night, near the intersection of Delafield Avenue and West 246th Street in Riverdale, when they say they saw the suspect riding a bicycle against traffic. They stopped him and tried to write him a ticket, but police say Burnette became uncooperative and refused to provide proper identification. He was taken into custody and the officers brought him to a precinct for further questioning because he fit the description of the suspect in the string of vandalism crimes. At the precinct, it was discovered that the bike had been stolen from a shul, and the individual matched the video of the suspect. 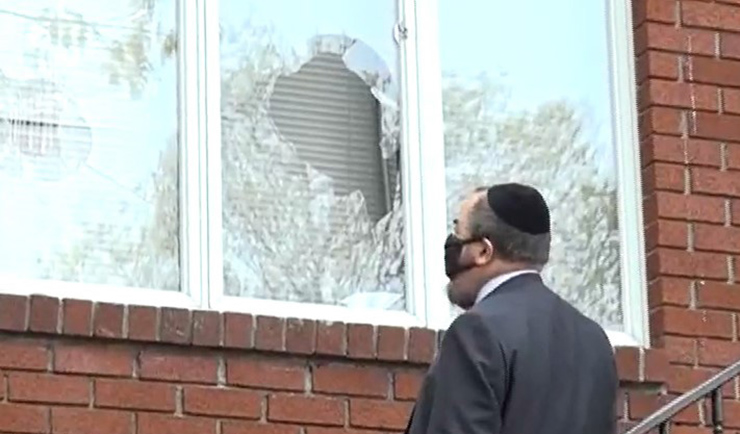 Burnette was charged with 42 individual crimes, including burglary as a hate crime and criminal trespassing as a hate crime. During the questioning, Burnette claimed that he did not throw rocks and made outrageous religious declarations. Judge Louis Nock, at the time, called the shattering of glass at the crime scene a violent felony and set bail at $20,000. “I’ve taken a very close look at the law,” said Nock. “Given the gravity and the number of charges he’s facing, this court is inclined to set bail.” But Bronx District Attorney Denise Clark seemingly appointed Judge Tara Collins to make immediate changes and subsequently the perpetrator was released.

Outrage was voiced by some notables, including US Representative Lee Zeldin of Suffolk County, a New York gubernatorial candidate who took aim at Governor Cuomo in a tweet. “After terrorizing the Bronx Jewish community, vandalizing synagogues, and stomping on religious freedom, Jordan Burnette was just caught and charged. Under NY’s terrible new cashless bail law, he’s already back on the street. This law should’ve never been passed and signed by Cuomo!”

New York State Assemblymember Simcha Eichenstein was also not shy in his remarks: “42 charges from his alleged 11-day crime spree. In New York, he’s right back on the streets. Hate crime perpetrators are more likely to be repeat offenders. This is why we MUST pass my bill (A2603) restoring judge’s discretion on bail for ALL hate crimes.” Here, Eichenstein referred to a January 19 bill where he introduced a measure to secure orders for those charged with hate crimes. The bill demands inclusion of “hate crimes as a qualifying offense for the purposes of a court’s determination to release the principal pending trial on the principal’s own recognizance or under non-monetary conditions, fix bail, or, where the defendant is charged with a qualifying offense which is a felony, the court may commit the principal to the custody of the sheriff.” The bill was cosponsored by Assembly Member Daniel Rosenthal, amongst other Assembly legislators: Abbate, Brabenec, Buttenschon, Cymbrowitz, Fahy, Thiele, Woerner, Paulin, and Rozic.

Dov Hikind, the founder of Americans Against Anti-Semitism, said, “What the hell is going on! Shame on DA Clark! Shame on Judge Collins! Where the heck is the Governor of the State of New York?” Hikind wrote, “As predicted just last week... After a violent Jew-hater who attacked multiple synagogues was arrested and charged w/ 42 counts, the Bronx DA found a 2nd judge to overturn $20k bail and set the criminal free to commit more violence with NO CONSEQUENCES!! #NoBailFailed.”

The questions that linger are the messaging that this sends for those who commit hateful acts. In New York, it appears that those who indulge in anti-Semitism – causing havoc and fear – face no consequences and will walk free once arrested. On Monday morning, Mayor Bill de Blasio said that bail reform laws need modification to keep people who commit non-violent hate crimes locked up, calling the area of hate crimes “a profound challenge” that requires a second look.

The Rabbinical Alliance of America–Igud HaRabbonim, representing over 950 American rabbis, called for a Legislative Review by the New York State Legislature. “Frustratingly, the current Bail Reform Laws do not permit New York Judges presiding over hate crimes to set bail, even to protect innocent citizens. The Judge’s hands are handcuffed and due to the well-meaning law’s unintended consequences, the Jewish public is scared to leave their homes and attend their houses of worship.”

Rabbi Mendy Mirocznik, executive vice-president of the Rabbinical Alliance of America, called this “a great travesty of justice.” Mirocznik added, “It is well documented that New York had the highest number of overall anti-Semitic incidents in the United States last year, with most of those incidents classified as harassment and vandalism. These acts of vandalism and terror sprees strike fear and hopelessness into the hearts of the good, law-abiding people who reside in New York City. These hate crimes not only violate sacred ground and show disrespect for minority cultures, they undermine the peace and tranquility of New York City and diminish the quality of life of its residents.

“The ‘catch and release’ of those charged with anti-Semitic crimes allows the Jewish community to be repeatedly attacked. The Bail Reform Law as it currently stands sends a message to the public that hate crimes are not taken seriously by society. Therefore, the Rabbinical Alliance of America calls upon the New York State Legislature to revise the Bail Reform Law to allow for the incarceration of those charged with hate crimes. This is a public safety issue, which must be addressed in order to preserve the rule of law.”