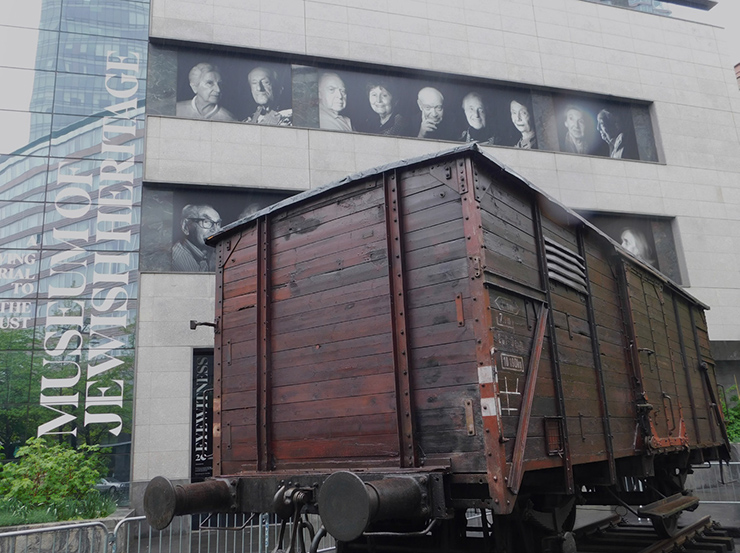 The title to this wonderful, impactful exhibit, “Auschwitz. Not Long Ago. Not Far Away.” at the Museum of Jewish Heritage in downtown Manhattan, is somewhat misleading. It is not an exhibit about Auschwitz, although we do get there – seeing a showerhead from the gas chamber, a German gas mask, an empty Zyklon B canister, and a huge cauldron where the watery soup was made for inmates – but that is later. 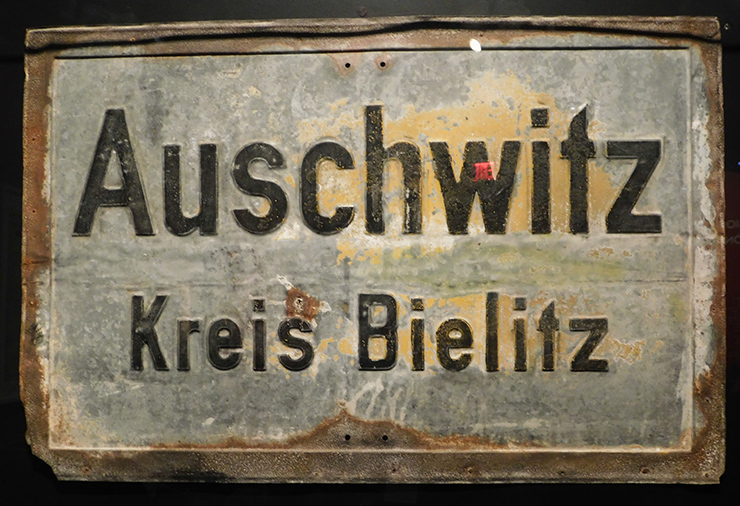 The first two floors trace what led to the Auschwitz death camp: anti-Semitism in Europe from the Enlightenment to the pseudo-racial science of Nazism; World War I and the financial crisis that brought Adolf Hitler to power; the Nazis and the Soviet Union wanting to take back land lost after World War I from Poland; Germany creating “Breathing Space” by expelling the Poles, settling “Pure Germans” into Western Poland, and changing the names of towns from Polish into German. 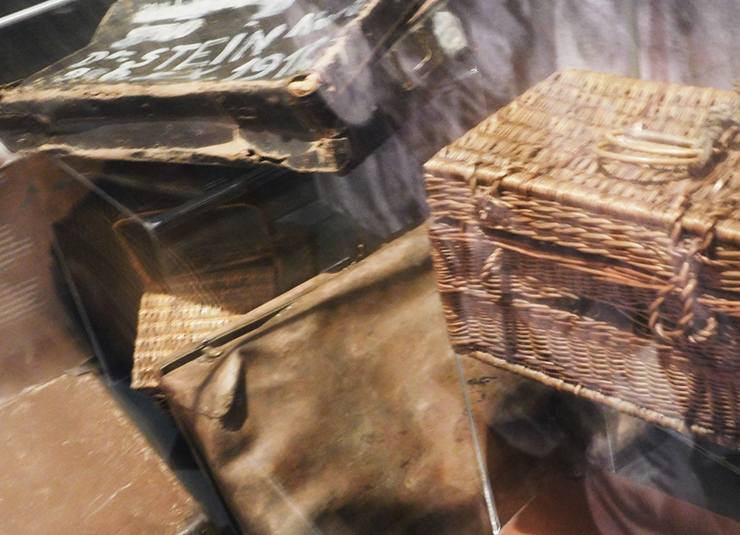 Before entering the museum, there is an actual German cattle car that transported victims to Auschwitz. We later learn that these cars carried 150 people with one bucket as a toilet and one bucket for drinking water.

Primo Levi is quoted often, including at the entrance of the exhibit: “It happened, therefore it can happen again.” The audio guide asks, “How did a society, similar to our own, create such a place?” One and a half million people were killed in Auschwitz; 1.1 million were Jews, and 200,000 were Jewish children. A child victim’s red shoe is on the first floor of the exhibit. Ninety percent of European Jewish children were murdered during the Holocaust. 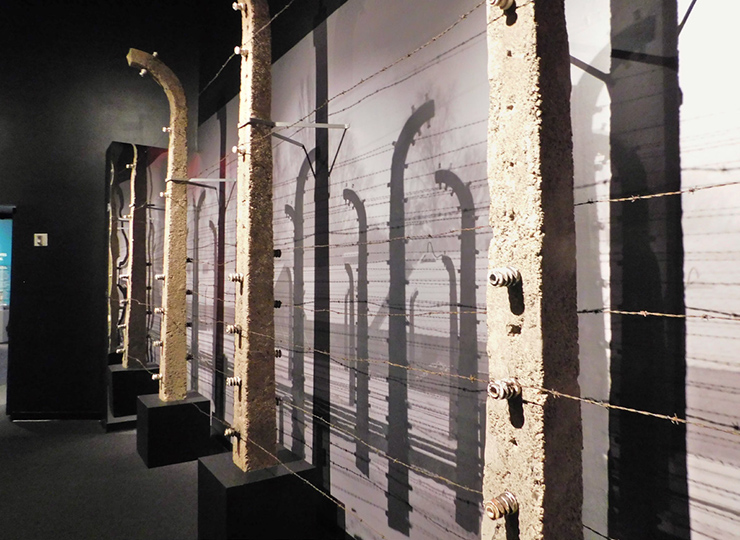 The Polish name for Auschwitz was Oswiecim, which had more than 10,000 residents, more than half being Jewish. We see how Jews lived before World War II. A small talis that belonged to a Hungarian boy who would die in Auschwitz is on display.

The Nazis accused German Jews of not fighting in World War I, but 100,000 Germans Jews fought, 70,000 Jewish soldiers were at the front, 12,000 were killed, and 18,000 German Jews received the Iron Cross, one of which is on exhibit. We see a Torah scroll saved from a Hamburg synagogue on Kristallnacht, November 8, 1938. On Kristallnacht, 267 synagogues were burned and 30,000 Jewish men were arrested. 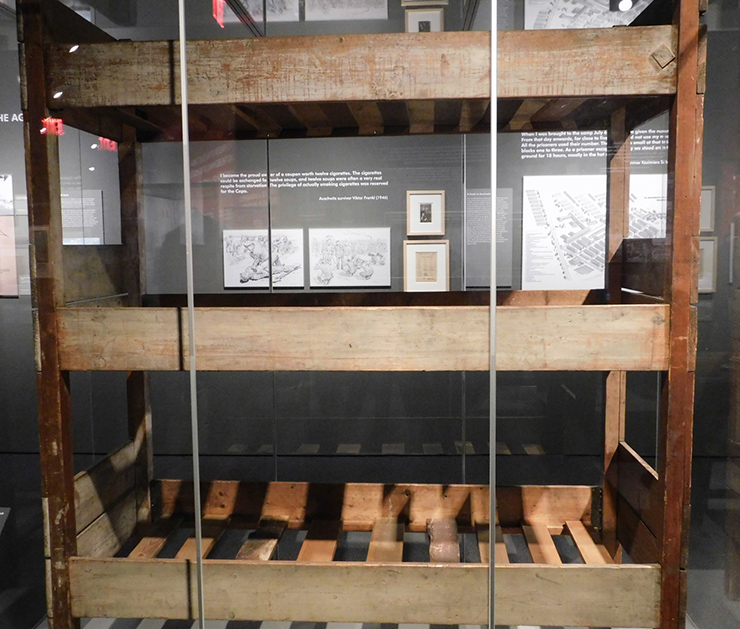 We learn how the Nazis originally wanted to make life so bad for the Jews they would emigrate. When the Germans took over Poland and a large swath of Russia, they wanted to expel the Jews to Madagascar, but their navy did not control the high seas. They thought of putting all the Jews in ghettos near Lublin but that was infeasible. Murdering all the Jews was decided in December 1941, and the Wannsee Conference, in a suburb of Berlin, put in the details. 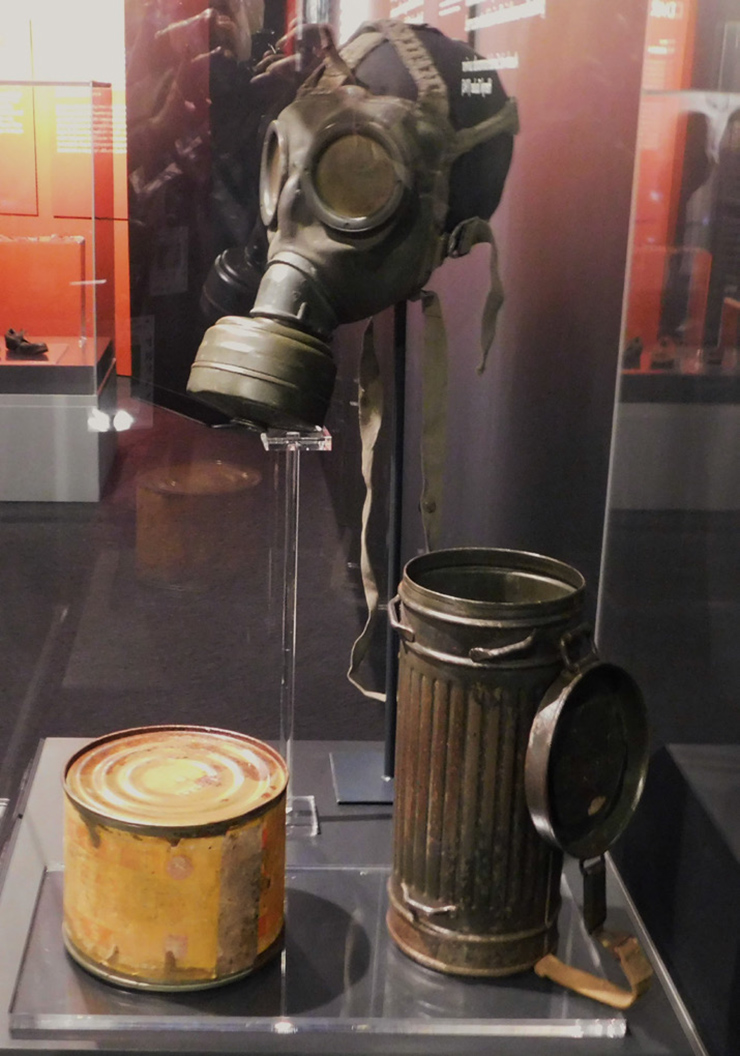 Auschwitz opened in June 1940 to house Polish prisoners at the former Polish Army barracks. It was expanded for Soviet prisoners of war. A whip used by an SS officer is on display. The disabled were the first to be murdered by the Nazis.

Auschwitz was the nexus of different railroad lines that became useful for transporting Jews. Slave labor was used for the nearby IG Farben rubber factory that was bombed by the United States in 1944 (but not the crematoriums). 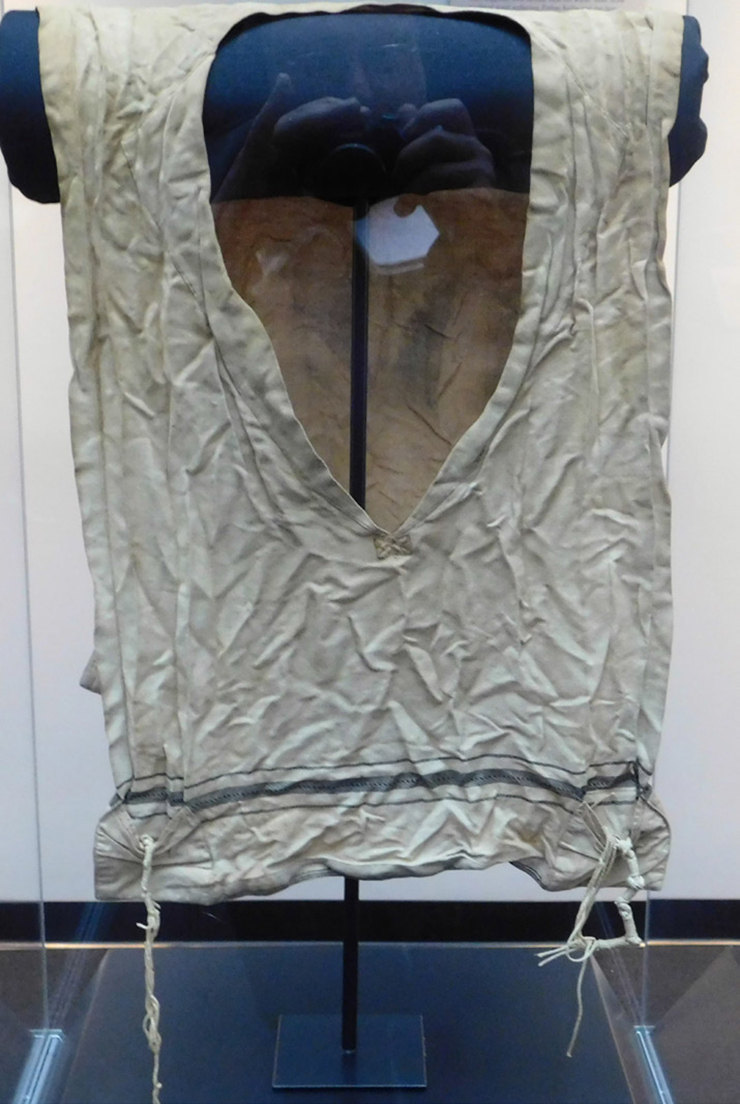 The worst jobs for the Jews were the Sonderkommandos, who took out the bodies (there is an actual stretcher at the exhibit) and pried the deceased’s valuables out. One Sonderkommando recognized her brother’s sweater. A Sonderkommando who was a rabbi said a prayer for each deceased child he had to put into a fire for cremation. Two out of ten people arriving at Auschwitz were selected to work 12-hour shifts until they died.

Profit from each person the Nazis murdered was estimated to be $750 each. When the Soviet Army liberated Auschwitz, they found seven tons of human hair, more than 300,000 men’s suits, and over 800,000 pieces of women’s clothing. 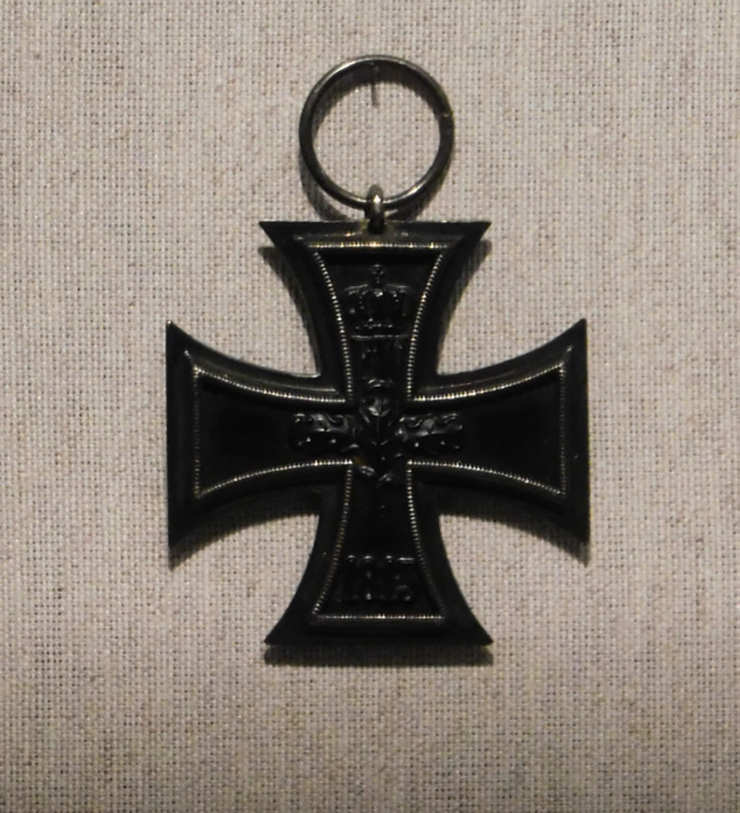 Despite the brutality all around the inmates, they said in videos, “Friendship and taking care of somebody other than yourself made a great deal of difference.” “Young girls stuck together as a group.” “We did everything we could to encourage one another.” When a rabbi organized Yom Kippur prayers, “whether they were Orthodox, Conservative, or Reform,” they came to pray together. “A small talis, worn (under penalty of death if discovered) by Mendel Landau of Hungary, is on display. He survived. 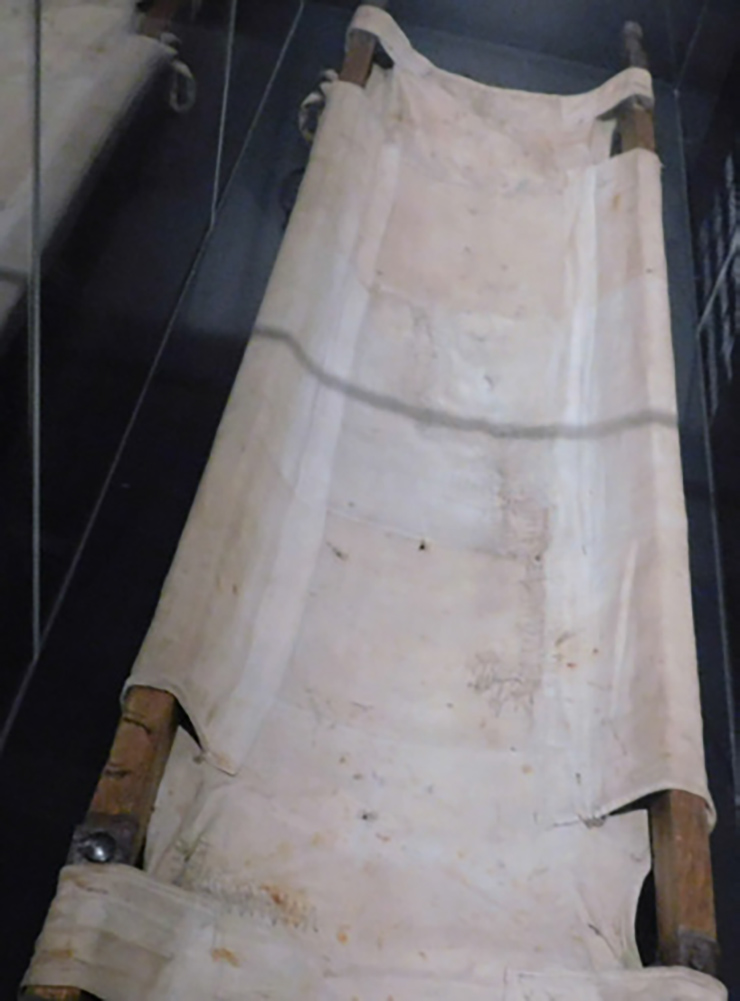 The testimony videos from the victims are inspiring: “Accept the differences.” “Stay away from hate; it’s not necessary.” “Don’t believe in nationalism based on ethnicity.” “Create love, understanding – that will create happiness.” “My message is: Please, fight for peace.” The theme ends with “Genocide is a societal act,” not by just a madman or a group. Society “could also choose to resist.”

There are videos of a Jewish Viennese family, a Jewish Czech family, and a Dutch Zionist group, and one realizes that we are just like they were.

More than 700 original objects and 400 photographs, mainly from the Auschwitz-Birkenau State Museum, as well as from 20 international museums and institutions, are on view for the first time in North America. 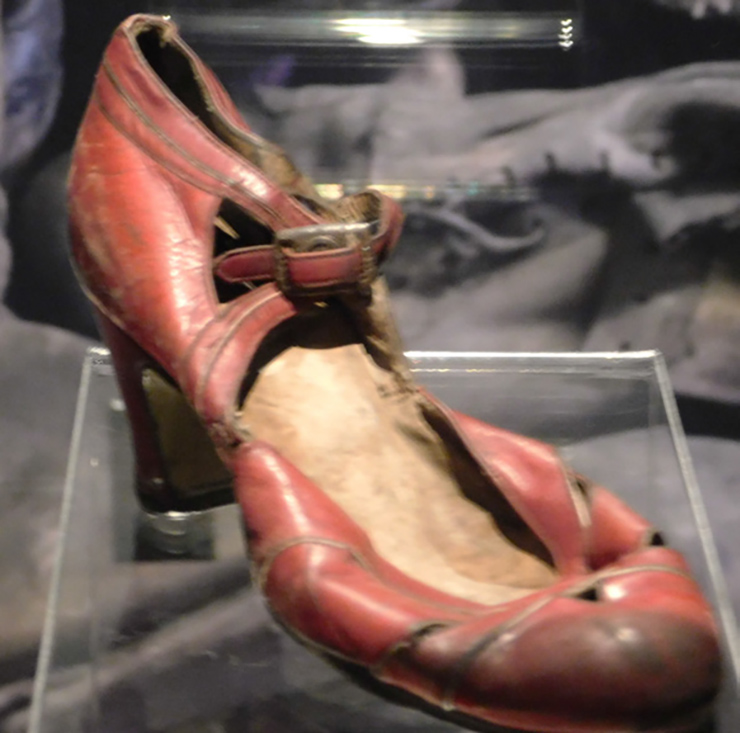 On display are suitcases of victims, prisoners’ uniforms, a sleeping barrack, concrete posts that were part of the Auschwitz camp, Heinrich Himmler’s SS dagger, helmet, and his annotated copy of Hitler’s Mein Kampf, as well as an anti-Jewish proclamation issued in 1551 by Ferdinand I that was given to Hermann Goring for his birthday by Reinhard Heydrich.

There is a 90-minute self-guided audio tour, in eight languages, for guests. The museum lets in visitors every 15 minutes so there isn’t any bunching up or crowding.

Buying tickets online is recommended at mjhnyc.org. The Museum of Jewish Heritage is located at 36 Battery Place in Manhattan; the phone number is 646-437-4202. Admission is free for Holocaust survivors, and active members of the military and first responders, as well as NYC public school students and educators. 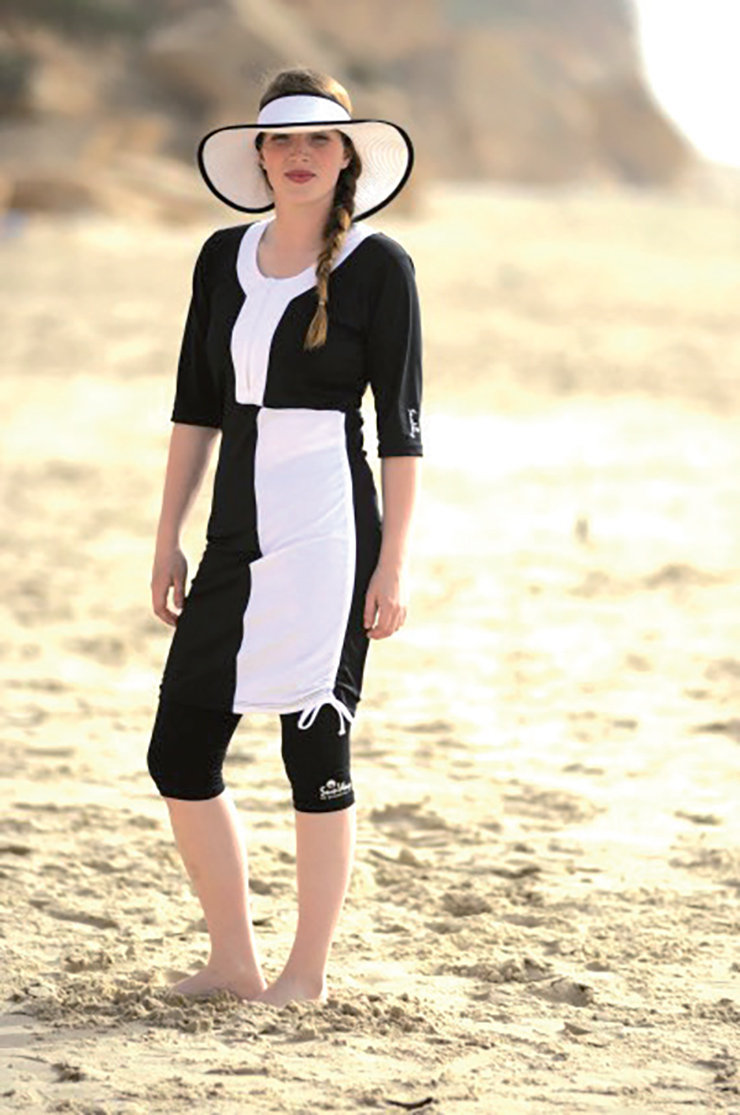