The Department of Homeless Services (DHS) has proposed a homeless shelter in the heart of the Briarwood neighborhood. The shelter, to be located at 138-50 Queens Boulevard, is part of Mayor de Blasio’s Turning the Tide on Homelessness initiative, which includes installing 76 facilities throughout the city. The idea has angered residents and the local Community Board. “This location is completely inappropriate,” stated a Briarwood resident who requested to remain anonymous. “There is a liquor store barely a block from the proposed site and it is immediately adjacent to a marijuana dispensary! It will never work out well for me and my neighbors.”

This region of Queens Boulevard is home to approximately 275 families housed in residential apartment building structures along the Van Wyck Expressway service road. Then, just a couple of short blocks further, are numerous other large apartment buildings with 500 or so families in five additional dwellings. Briarwood is also home to rows of single and two-family residences, and such a shelter threatens their safety.

On inspection of the area, one will observe that this location is directly across the street from the only supermarket, a Key Food, serving the community’s hundreds of families.

Business owners along Queens Boulevard are alarmed by the proposed shelter. “Hasn’t COVID-19 taken enough from us?” asked one Bukharian store owner. “The impact from the pandemic will be felt long-term; we don’t need the burden of a shelter added on.”

Another community resident, who asked to be identified only as Abigail, offered an explanation to naysayers. “We have nothing against shelters being erected for the homeless of New York City, specifically those here in Queens, but common sense shows that this location is wildly inappropriate.” 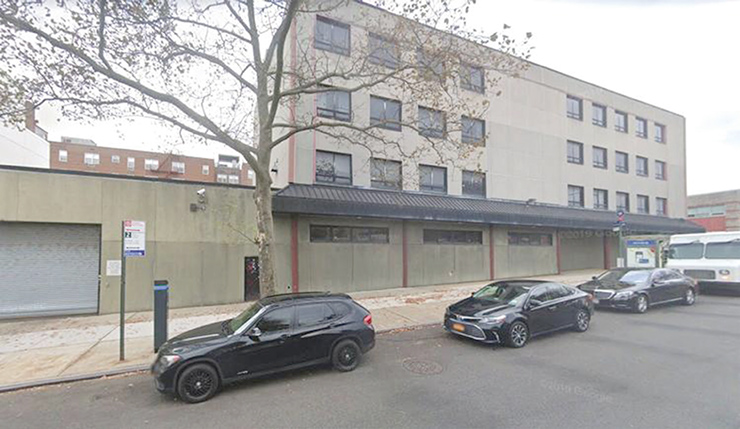 James F. Gennaro, the former City Council Member for the region and current City Council candidate, commented on the debate: “When I was the Council Member for Briarwood, at the request of the Briarwood community, I rezoned that section of Queens Boulevard to allow for ‘mixed use’ development that would attract investment and development and revitalize the community. This development has been a great success, with additional new development under construction now and new development proposed. This shelter effectively shuts all that down, it kills development potential, and it vaporizes untold millions in commercial and residential property values.”

As it stands, the building will be transformed into a permanent high-quality, borough-based shelter facility, which will house 175 homeless single adults beginning in September 2022. On December 9, Community Board 8 overwhelmingly voted against the plan 37-3. The arrangement calls for an open floor dormitory style with a single community bathroom on each floor, along with three daily meals served in a cafeteria setting.

“The 175 ‘barracks-type’ men’s shelter poses a real safety risk to Archbishop Molloy High School, a popular neighborhood playground, and the Briarwood Public Library. In a teleconference held with representatives with the NYC DHS and the proposed service provider, Westhab, DHS indicated that 30% to 40% of the residents would be mentally ill and/or drug users, and that all services provided by Westhab would be ‘optional’ for shelter residents. The only mandatory requirement for the shelter residents would be for them to meet with their respective case workers every two weeks,” explained Gennaro.

The City asserts that the homelessness issue stems from Briarwood, and that their own residents will be given priority. The staff of 40 will include on-site security and a complex 75-camera system, along with a mandatory 10 p.m. curfew. The City has also broached the idea of bringing in a community security group and organizing an advisory panel. Local Briarwood residents would receive a phone number they could call if shelter residents engage in threatening or menacing behavior. Still, the commercial and residential communities are dead set against this facility. “The Community Board was right to reject this facility, although its vote is merely ‘advisory’ in this process. I join with the residents and businesses of Briarwood in opposing this ill-conceived facility in the heart of this thriving community. Fighting this shelter with the full authority of my office when I am elected will be my top priority. The homeless, of course, need and deserve to be housed, treated, and re-assimilated back into society, but this site is the worst location imaginable for such a facility,” concluded Gennaro. 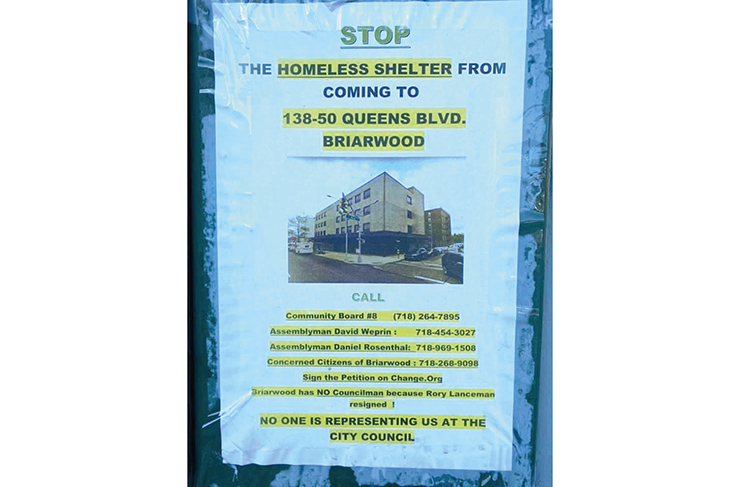 Currently, the Briarwood Residence, a family homeless shelter, is located a mile away from the site, but single adults have no resource in their district and this site will alleviate that issue.