The largest known public display of Torah thoughts on Shiv’ah Asar B’Tamuz took place right here in Queens, sponsored by Chazaq and Torah Anytime at the Agudath Israel of Kew Gardens Hills. Our community is fortunate to have Chazaq and Torah Anytime in our midst. Both of these organizations are constantly immersing our community and klal Yisrael in Torah and holiness. 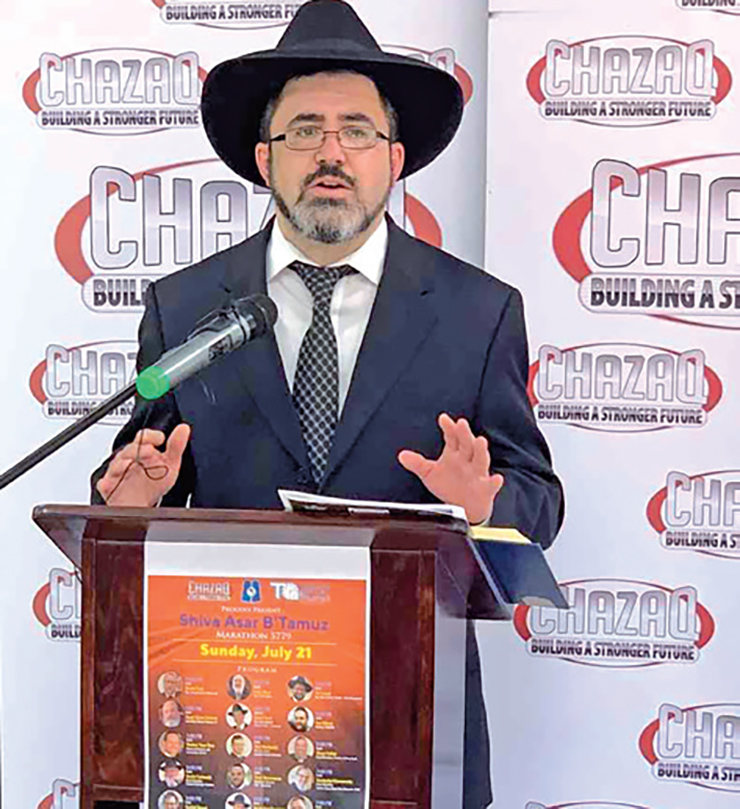 The first speaker, Rabbi Moshe Taub, rav of the Young Israel of Holliswood, spoke about the recent tragedy in Virginia, where so many Jewish organizations and people came together to help recover the niftar, Rabbi Reuven Bauman z”l, who drowned trying to save his campers. When the rescue mission turned into a recovery mission, Rav Dovid Feinstein instructed the family, “Don’t start sitting shiv’ah until the body is found.” 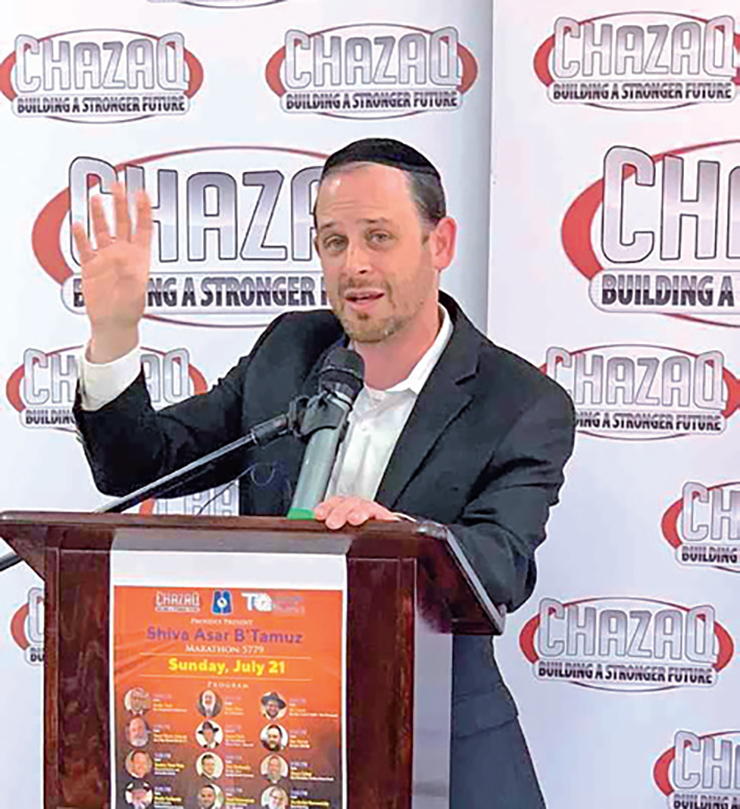 “This,” Rabbi Taub taught, “is a p’sak of hope. Never give up.” Misaskim found the body hundreds of miles away, in the waters off the North Carolina coast. If the family had started sitting shiv’ah, then the search would have ended, and they never would have found the body. He shared a d’var Torah about Basya, who stretched her arm out to reach baby Moshe in the Nile River. Why did she bother? The baby was floating so far away from her, yet Hashem made a miracle and stretched her arm miraculously so that she was able to reach the baby. Rav Yerucham Olshin taught, “That’s klal Yisrael. We always have hope. Hashem can bring salvation in the blink of an eye.” 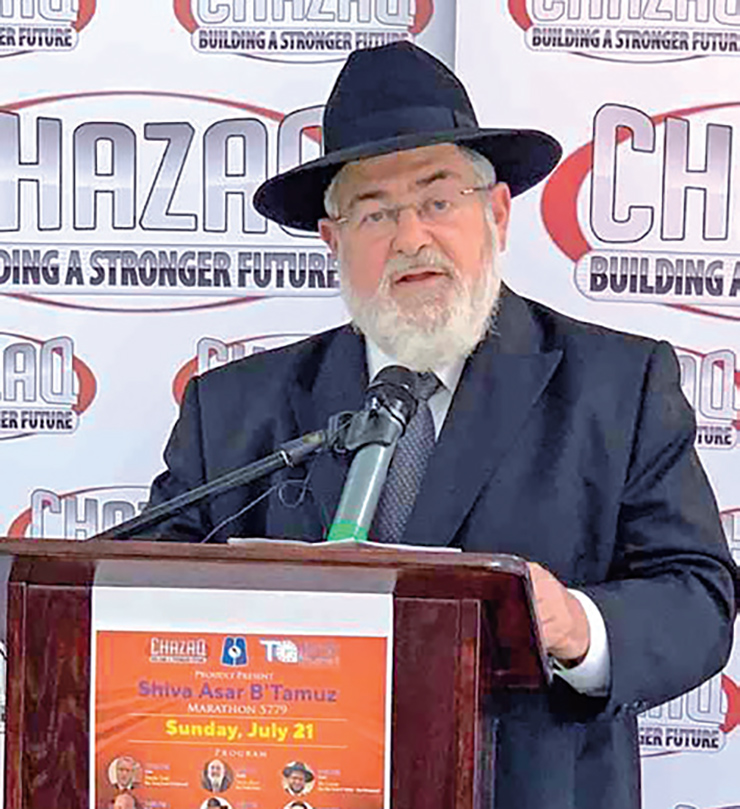 Moshe Rabbeinu broke the tablets when he saw the Jewish people worshipping the Golden Calf.

During the Babylonian siege of Jerusalem, the Jews were forced to cease offering the daily sacrifices due to the lack of sheep. 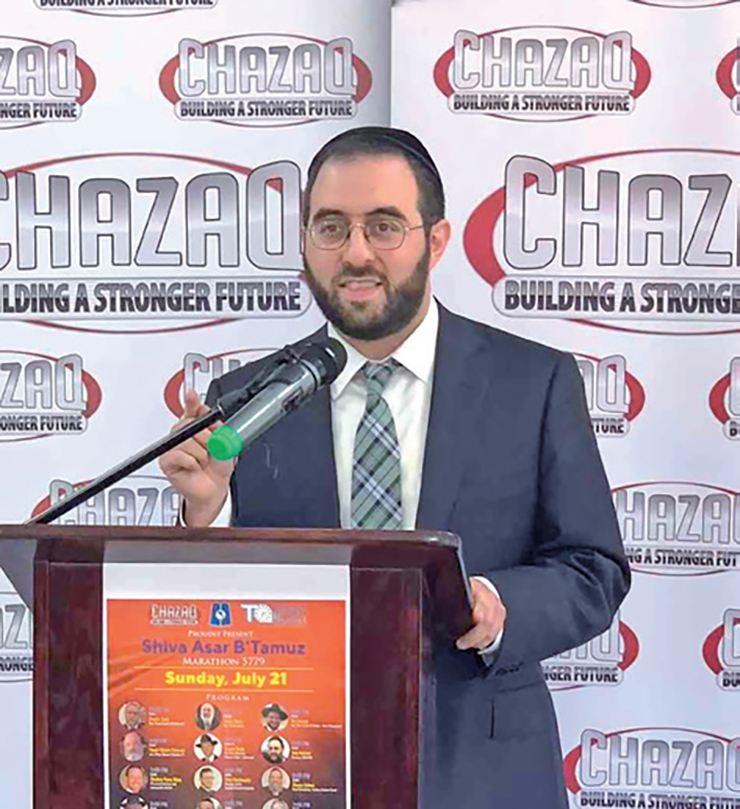 An idol was placed in the Holy Temple.

The walls of Jerusalem were breached by the Romans. 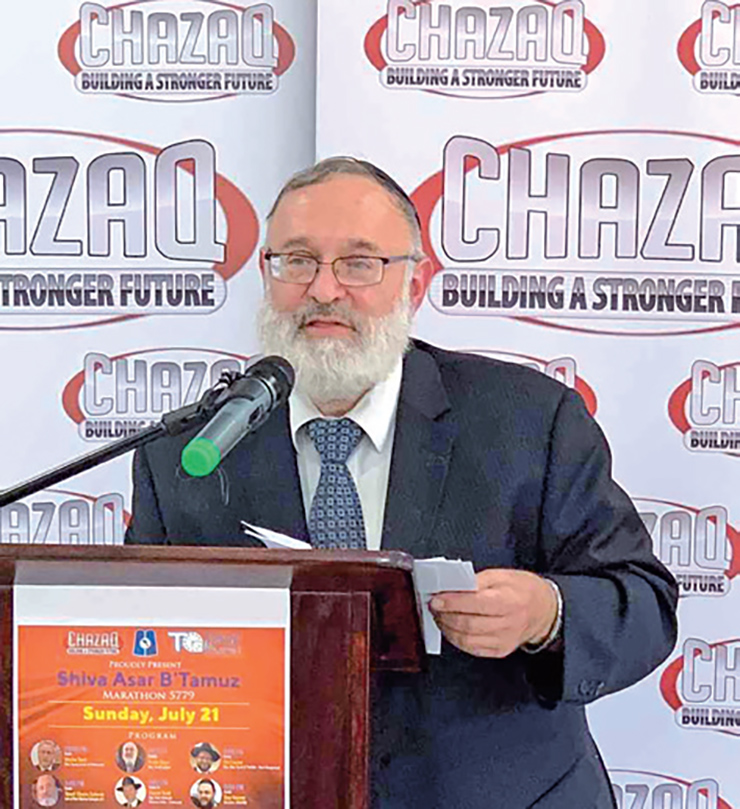 Rabbi Taub posed an interesting question. Why do we focus on the breaking of the Luchos and not the sin of the Golden Calf, which happened at the same time? He explained that when we mourn the breaking of the Luchos, we mourn the mitzvos that we could have done. “Shiv’ah Asar B’Tamuz is unique because it focuses on what could have been.” He taught, “We must realize that we are in galus.”

He concluded with a brachah that klal Yisrael should only celebrate simchos, and Tish’ah B’Av should be a yom tov. 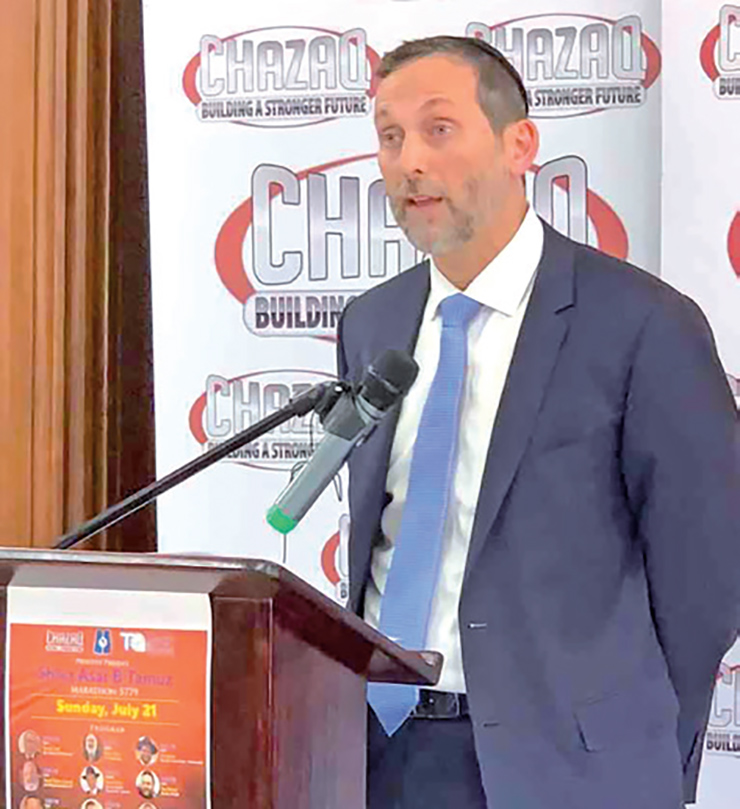 The next speaker, Rabbi Shai Tahan, taught that we need to explore the core of how things began that led to Shiv’ah Asar B’Tamuz. He quoted that Hashem said that we cried for nothing when the spies came back with their negative report of the Promised Land, so I will institute crying for generations. He taught that on the surface it appears they had good reasons to cry. The Land of Israel was hard to conquer. There were giants living there. The surrounding nations were strong and armed. It seems like a natural reaction that the people cried. 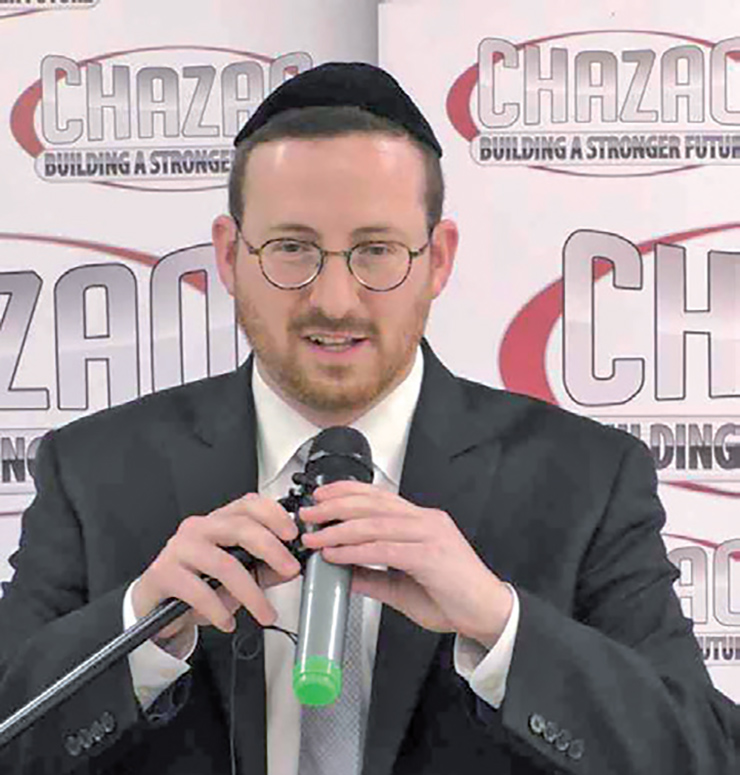 He pointed out that they also complained on the road when Hashem was leading them out of Egypt. They cried that they wanted meat. “The problem is that it wasn’t positive complaining. The reason they complained was that they didn’t want to be together with Hashem and they made a protest against Hashem. Their whole purpose was hidden and unspoken. Their complaining was negative and they were trying to anger Hashem.” 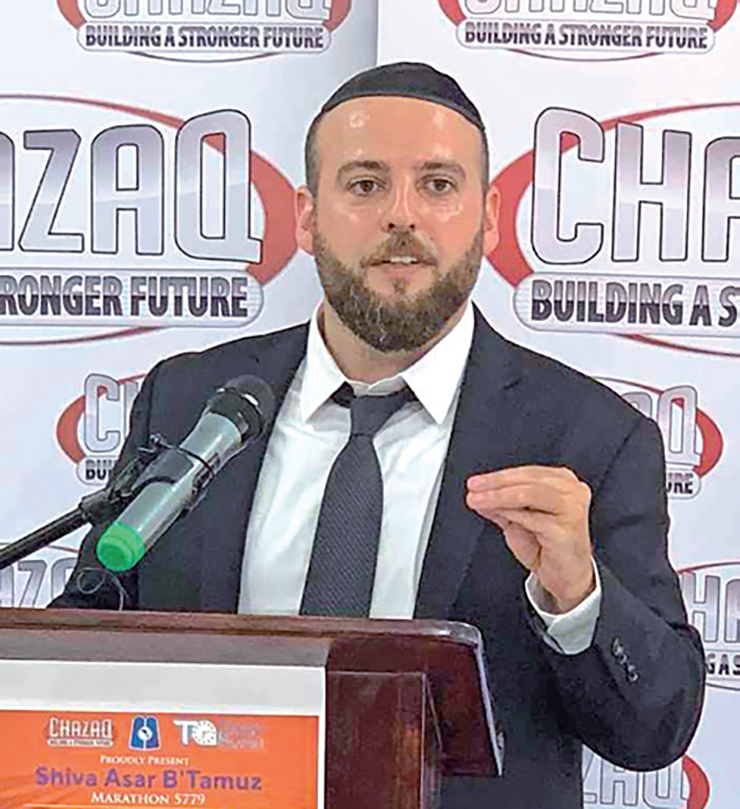 When the spies came back, am Yisrael didn’t want to go to the land, so they complained. “They were saying, ‘Hashem hates us so He is taking us to Eretz Yisrael.’”

Rashi teaches that am Yisrael hated Hashem because when they complained and said Hashem hates us, their hidden message was that they hate Hashem. Rabbi Tahan explained that this is not a true complaint. We only have the right to complain when we are really in pain. 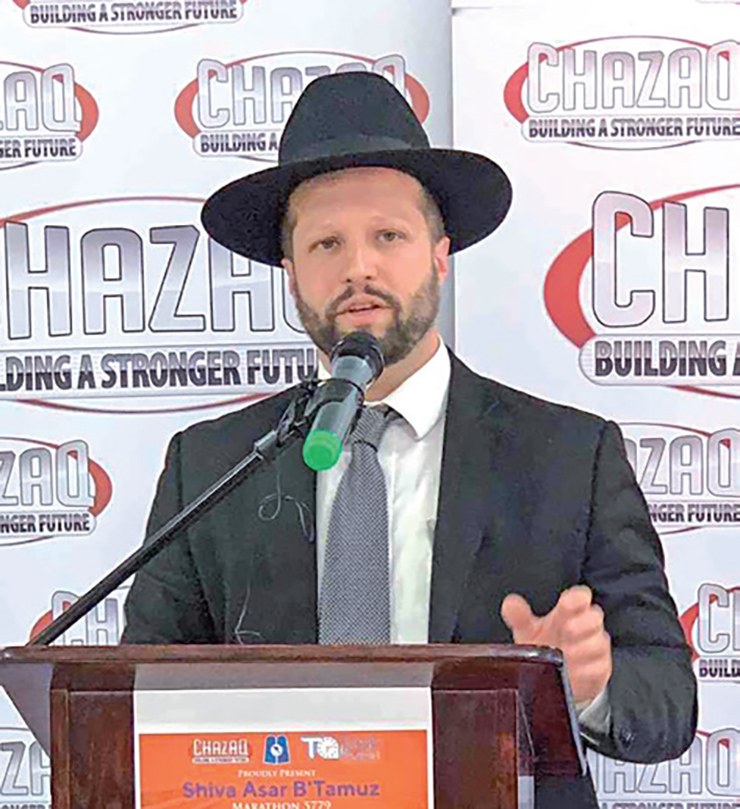 He connected this to the idea that when somebody complains, we need to understand the hidden message behind the complaint. It’s all a cover-up. “We need to open our eyes to see what the reason is behind the complaint.” He gave the example of a child who says he doesn’t want to go to school. The real reason could be that someone is bullying him, so we have to look for that hidden reason.

“Today, we have to be honest with ourselves and with Hashem.”

The next speaker, Rabbi Shalom Yona Weiss, renowned speaker and community activist, stated that Hashem is missing from our lives. We have to ask ourselves where we put Him. We destroyed the Beis HaMikdash with the sins we did. “The physical world is spirituality pushing through and it comes out in this world. He taught that there were five things that happened on Shiv’ah Asar B’Tamuz and five things happened on Tish’ah B’Av. This is a hint to the two parts of the Ten Commandments. Since, we weren’t keeping the Ten Commandments, five things happened on each of these days. 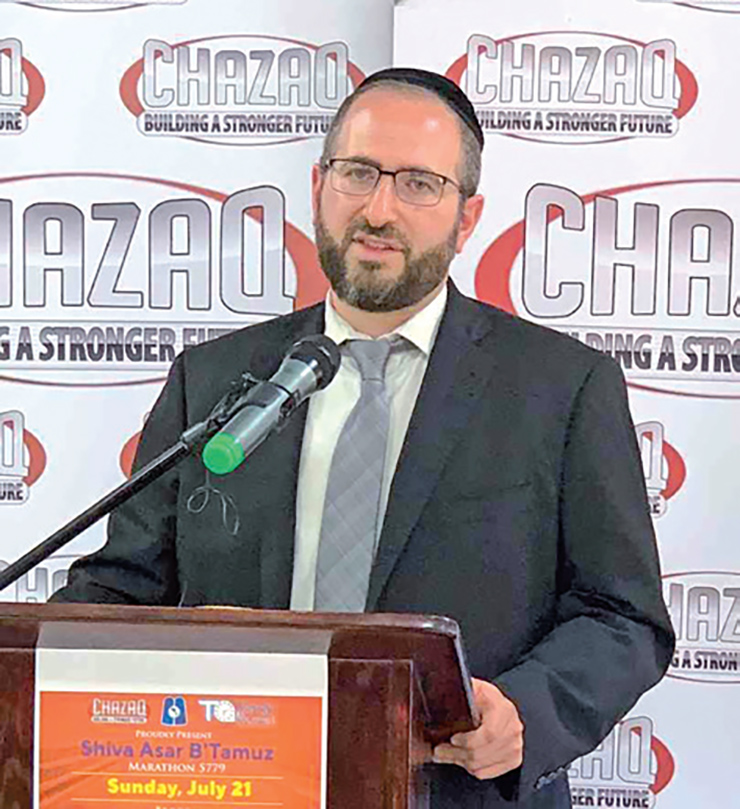 He noted that the representation of the two tablets is always with rounded tops, reminiscent of the shape of the heart, since we are supposed to engrave the Ten Commandments on our heart. Hashem took the rock and He engraved it with His finger. When the Luchos broke, the letters flew back into the air. In this way, “Hashem wanted to show the world that He exists in every fiber of the world.”

Rabbi Weiss taught, “The common denominator for the five things that happened is that we don’t want the open, real, permeating, all-encompassing existence of Hashem in our lives.” The question Hashem asked Adam after he sinned is Ayeka, where are you? Hashem is teaching man that he is naked if Hashem doesn’t permeate everything. Ayeka reverberates for us throughout time. We should be hearing, “Where are you?” when we daven. He pointed out that when we daven, it shouldn’t be in the mindset of Amazon.com, where we order whatever we wish and then we promptly receive what we order. Rather, we should be davening to ask Hashem to bring us close to Him. We need to see ourselves as a neshamah. We need to understand that the physical part, our body, is just the dressing for the neshamah. 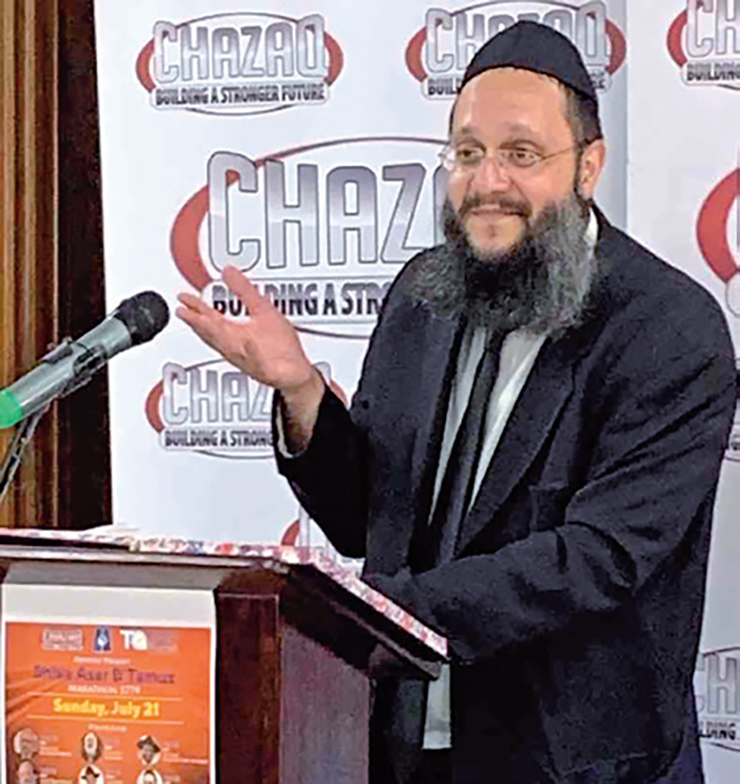 The next speaker, Rabbi Moshe Faskowitz, the rosh ha’yeshivah of Yeshivas Madreigas HaAdam, shared a stirring shiur. He began with the thought that 2,000 years of galus has taught us many different lessons. We are surrounded by a world that often seeks to destroy us and hates us. We have a tendency to let our guard down. He shared that “we think we can partner with Eisav, and this is a huge mistake. This is a flaw. This is naïveté.” He taught that “this galus is an extension of the destruction of the Beis HaMikdash. That fire is still consuming our people.” We see assimilation, rejection of Torah values, mocking of our people. On the other hand, we merit having so many yeshivos, batei midrash, seminaries, and kiruv and chesed organizations. “We must never forget though that this is still a churban. The galus we are in now is like a slow poison.” 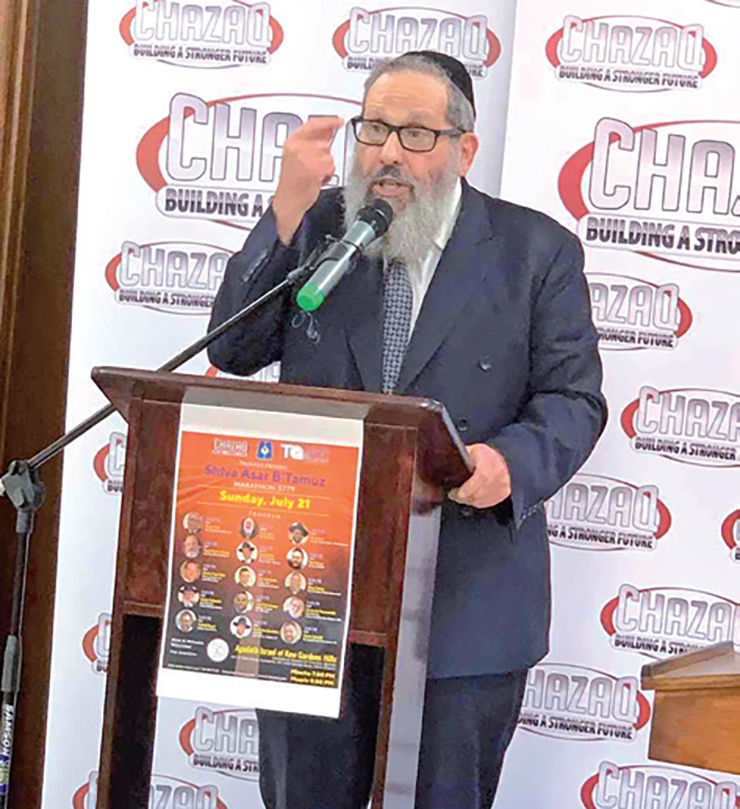 He shared a mashal from the Gemara of a boat traveling in dangerous waters. The passengers spot something that looks like an island with trees growing on it. They don’t know that it’s really a giant fish. It looks like an inviting place to stop. The passengers disembark and make themselves comfortable. They start baking and making a fire. It becomes so hot that the fish rises up and turns over and all the passengers are thrown into the sea. They are saved only because there is a ship passing by.

The metaphor here is telling us clearly about Jews in this long galus. We are in a ship going through turbulent waters. Every moment, Hashem sends us challenges. Sometimes, we think we will fall apart, and we will be done. We are in a port with comforts and things are quiet. We are happy and we feel secure; but every time that happens, it gets hotter. The heat is on and the fish rises. All of us fall into the water and no one can be saved until they see a ship passing by. “It’s an eternal struggle. We will find ourselves the target of all nations. The ship passing by in the above metaphor is Eretz Yisrael. It’s the only safe place. This is how klal Yisrael will prevail.” He emphasized, “The problem with a churban is that we don’t always see that it’s a churban.” 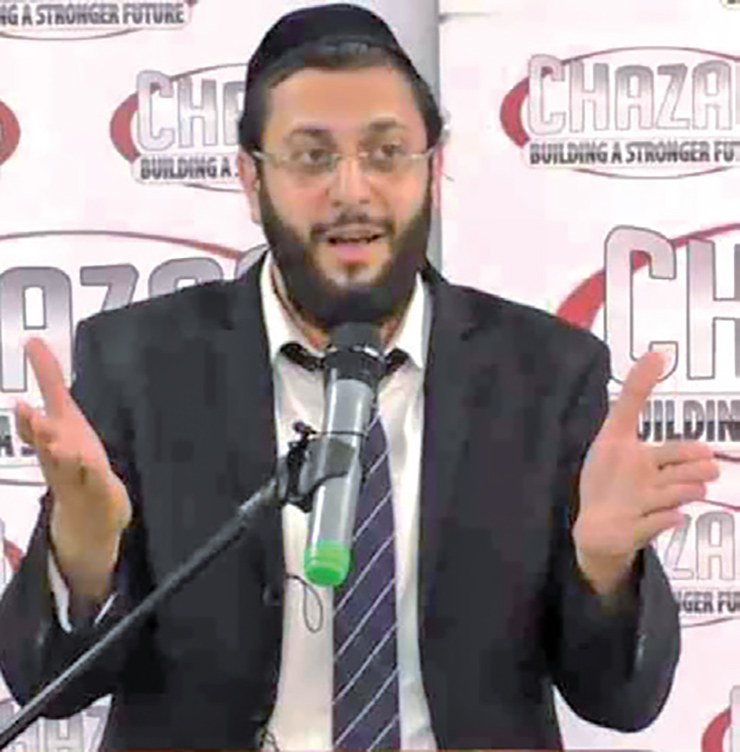 He spoke about the fact that Jewish people need to recognize the holiness of our own mikdash m’at. Our journey through life is to rebuild the Mikdash. “If we show Hashem that we have an appreciation of the k’dushah, then Hashem will bring us k’dushah.”

He concluded, “As long as we are in galus, this is not our place. It’s not over until Hashem brings us home.”

He urged everyone in the audience to take on some small thing to show that we are in mourning for the loss of the Beis HaMikdash. He said, “Only daven in places that demonstrate that Hashem is listening to every word.” 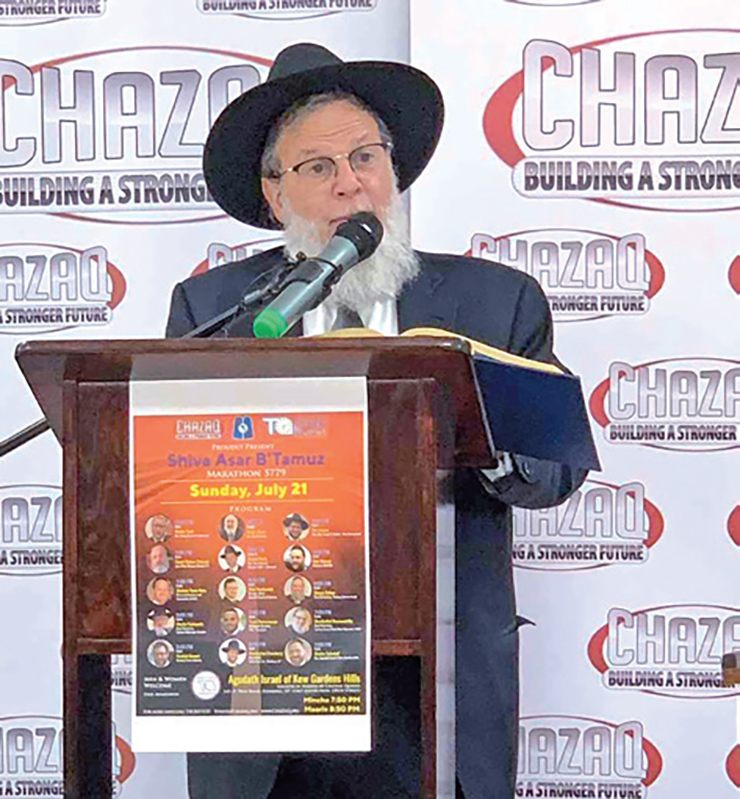 Following this, Rabbi Yechiel Benari, the rosh ha’yeshivah of Yeshiva Toras Halachah, pointed out how B’nei Yisrael were getting ready for a “chag” when they were waiting for Moshe to come down with the Torah. In the same way now, we all took haircuts before the Three Weeks. We are all ready for a yom tov. “We still have work to do. How do we make today the last day of national mourning forever?”

He noted how we pushed it off because we were fasting on the 18th of Tamuz. How did we do that? He demonstrated with the Hebrew letters that are used for calculating the calendar. The first day of Pesach is always the same day as Tish’ah B’Av. The second day of Pesach is the same day as Shavuos, and the third day of Pesach is the same day as Rosh HaShanah. The year of the first Pesach, Hashem made a calendar so that the first day of Pesach was on Shabbos. This means that both Shiv’ah Asar B’Tamuz and Tish’ah B’Av were also on Shabbos. The holiday of our redemption embodies all future redemptions. So here, we see both Shiv’ah Asar B’Tamuz and Tish’ah B’Av were pushed off then and this happened this year. Since Pesach started on Shabbos, this meant that everyone in Israel, along with Jews outside of Israel, were all eating matzah on the eighth day of Pesach. When klal Yisrael does something together, unexpected, it pushes off mourning. This is achdus, and that’s from the calendar this year. “Today is 40 days since Shavuos, when we were “one person and one heart.” We had the achdus. Don’t forget it. Hold onto that unity.” 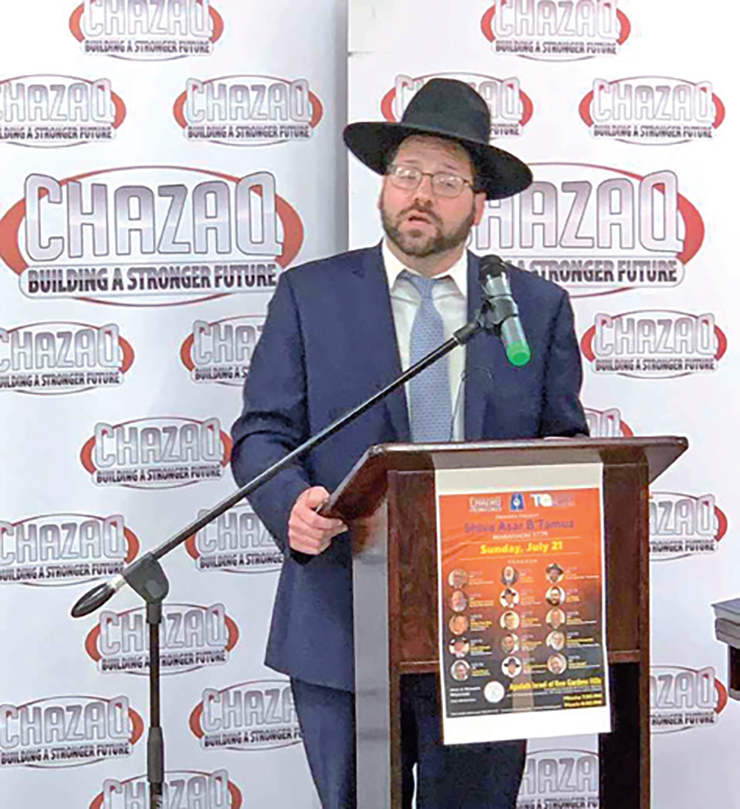 He noted how even though it doesn’t seem like a big thing that the Jews were eating matzah all on the eighth day, this teaches us that when it comes to achdus, we can do little, tiny, small things. “Hashem wants us to do our little part.”

He concluded, “We just need a spark of achdus, and shalom can light up the world. The ingredient we need to push off aveilus is achdus.”

Following this, there were many more magnificent speakers.

Our community members are in awe and grateful for this incredibly inspiring program. The merit of this learning and our applying it to our lives should bring us out of galus now, before this year’s Tish’ah B’Av. These shiurim can be viewed on www.TorahAnytime.com.