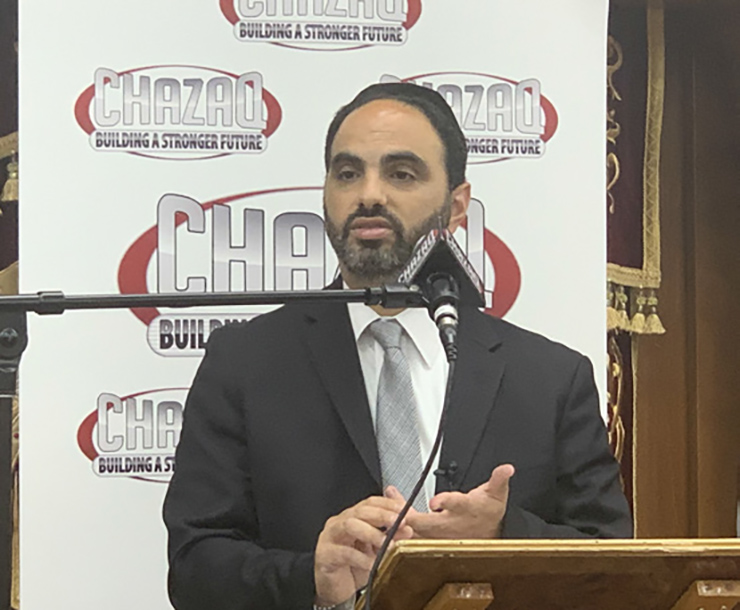 “The goal of every fast day is for us to grow and come closer to Hashem and to do t’shuvah.”

On Shiv’ah Asar B’Tamuz, Rabbi David Ashear spoke at Beth Gavriel on behalf of Chazaq, and the shiur was also live streamed by TorahAnytime.

Robbie Aboff, Events Coordinator of Chazaq, welcomed everyone. Then Rabbi Ashear, author of the Living Emunah series and well-known speaker, shared a teaching of the Vilna Gaon that, after 120 years, when we are asked by Hashem what did we accomplish, we will feel a regret so strong and intense.

It doesn’t have to be that way. Rabbi Ashear taught that we know there is a day of reckoning and how much potential Hashem gave each of us. If a person saw all the negative effects of one sin in all the layers of Heaven, he would never sin. If a person saw the value of a mitzvah, he would never stop chasing mitzvos. Rabbi Ashear shared, “We need to know we have a piece of Hashem inside of us. Your Father invested so much in you.” Man was created to toil. We are here in this world to accomplish. We just need the will to do it.

He pointed out that a man who is a multi-millionaire will still work late hours because it’s not fulfilling to just sit by the pool. He wants that feeling of accomplishment. We acquire satisfaction through accomplishment. It’s in our DNA. Everybody’s toiling, but fortunate are the ones who put all their investments in Torah. “This is what life is about. We don’t want to have regrets.” 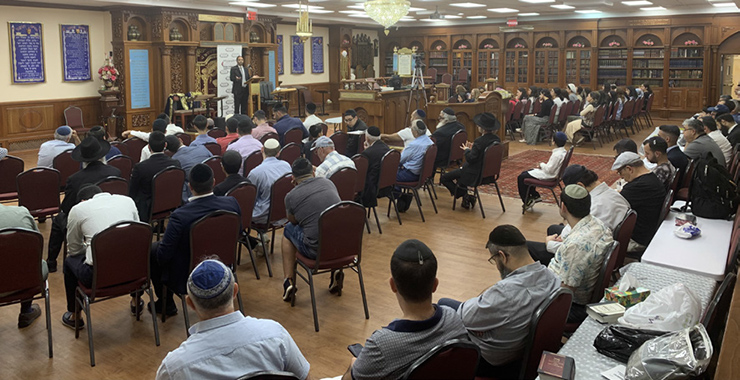 Today we are mourning the breaching of the walls of Yerushalayim. The first thing that happened in history was that Moshe saw the Jews worshipping the golden calf and he broke the tablets. If the Jews had not done this, then they would have merited to never forget any Torah they learned. If they would have realized the ramifications of their deed – that they would lose their crowns and every generation would be punished – then they wouldn’t have done it. Rabbi Ashear stressed that “we have to realize that there are so many ripple effects to our deeds.”

Tish’ah B’Av started with the spies’ negative report about Israel. If they hadn’t related this report, then there would be no exiles and we would have gone right into the land. Tests don’t just happen. The spies were being tested to see if they trusted Hashem. Hashem tests us. Hashem knows every test that will take place before we are born.

If Kamtza knew that he would be the cause of the destruction of Yerushalayim, he would never have not invited Bar Kamtza to stay at the party. “You have to know that everything is on the line in our tests.” We need to see the value of what we are doing and that learning Torah gives us energy. Every mitzvah is filled with s’gulos.

Rav Yosef Caro merited to learn with an angel. The angel told him what was going on in Shamayim. He told Rav Yosef Caro that when he will go up to Hashem, Hashem will purify him from all his sins from birth to the end of his life and his sins will sink like lead to the ground. The angel told him that he would come out pristine and he would go to the highest levels of Gan Eden. The reason he merited this was because he revealed what the Rambam meant in his teachings, and Hashem was delighted with his efforts. Rabbi Ashear taught that Hashem enjoys our toil in Torah. The value of learning is unparalleled.

“We have life so we can still do it.” He added that anyone careful to wear garments that are b’hidur will merit garments with the intense glow of holiness from Hashem. The Rav of Kalev taught that if a woman dressed like the Imahos, then each piece of that material of the clothing will balance the scale of judgment in her favor. “Don’t regret it later and say I should have done it. Life is short.”

The Chofetz Chaim taught that if someone can accept how Hashem deals with him in life, then his level will increase and his table will be complete with good. When we say, “Hashem, I trust You,” we become great from this. Having hope in Hashem is included in the First Commandment. “That’s what life is all about. Hashem wants us to hope. Everything gets accomplished with your hope.” We have to know that we have nothing in this world but Hashem. We have to say, “We want only You, Hashem.” Then Hashem will bring us back. Now is the time. If we do what we are capable of, then these days will turn into days of joy!