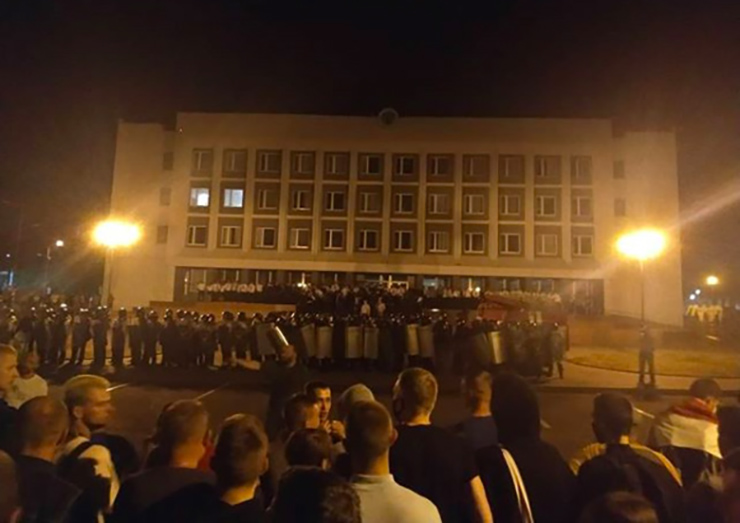 Belarus has long been described by western observers as the last dictatorship in Europe. It still has streets named after Marx, Lenin, and Dzerzhinsky; the state police still has the KGB initials, the red star adorns the state emblem, and its president, Alexander Lukashenko, has been in power for 26 years. But unlike the Chinese, the people of Belarus have access to an uncensored Internet, and many citizens have family members living abroad where there are more economic and political opportunities. This past Sunday, they voted in unprecedented numbers against Lukashenko’s bid for a sixth term.

Among the voters was my mother-in-law, who stood at an opposition rally prior to the election, registered her name on a list of opposition voters to check against the official results, and then she went to vote. That evening, the results were announced with an 80 percent landslide in favor of the incumbent, with challenger Svetlana Tikhanovskaya, 37, receiving merely eight percent. Such numbers brazenly ignore the massive rallies in support of the former English translator who ran as a placeholder for her husband Sergei who was arrested and tossed off the ballot.

Soft-spoken but firm, the 37-year-old stay-at-home mother who had never run for office was an unlikely but highly relatable challenger to the 65-year-old strongman whose main platform was the stability that he maintained for his country in contrast to the troubles in neighboring Ukraine. With the coronavirus pandemic, Lukashenko’s dismissive attitude at virus-related deaths and preventive measures appear to be the last straw. My mother-in-law is not a typical protester. At her age, she could sit back and collect her pension checks without caring for the country’s future. “I’ve never been the type to accept an injustice,” she told me on Sunday.

The next day, videos taken across Belarus showed nonviolent demonstrators protesting the election results being met with shields, water cannons, sticks, and bullets. In Minsk, a military truck sped into an unarmed demonstrator. Within a few hours, Internet service became spotty and then entirely nonexistent in Lida, my wife’s hometown. Early reports of police forces standing down in Lida on Sunday were countered the next day by a video of police officers clubbing a demonstrator on the block where my mother-in-law lives. Were these officers local or brought in from the capital?

From our home in New York, my wife could have stood in line at the Belarusian consulate in Midtown to cast her vote, but she found it more meaningful to donate for the medical needs of the demonstrators, keep our friends informed of the situation, and check up on her mother. Our children carry Belarusian passports but not because we have any illusions of returning to the Old World. We hold onto them because we believe that a better future is possible for Belarus. Perhaps when our children are older, they can visit Belarus for kiruv, see their ancestral homes and graves, or find business opportunities. We live in New York, and we pray for democracy in Belarus.