After living peacefully among their non-Jewish neighbors for many years, the lives of the Jews of Kittsee changed drastically right after the Anschluss. They lost their rights, were humiliated, and eventually were thrown out of their homes on Pesach. They wandered from border to border for days with no food or drink, begging to be admitted to another country but no country would take them in.

On the fourth night, they were standing outside the Hungarian border. A guard came towards them. My seven-year-old aunt fell at his feet and begged him to have pity on them and take them to a room or stall where they could warm up and sleep. The guard actually had tears in his eyes and answered that he also had children and surely would not want this to happen to them. If it were up to him, he would take them to a house. Soon the Hungarian and Czech guards decided to send the group back to Austria. Knowing that they were not welcome there, the Jews begged them not to send them back. But their pleas fell on deaf ears. The Nazis rounded up the crowd at night, like a herd of cattle, and led them back to the border of Austria. They led them over the border to a wide-open field and then quickly vanished into the darkness.

The Austrian storm troopers came running towards them with their lanterns and stood before the group. They were shocked and angry at them for coming back after they were explicitly told never to return. The Jews tried to explain that it wasn’t their fault, but the guards continued to blame them. They even accused them of not being citizens of Kittsee. They asked them to prove their citizenship, but, of course, this was impossible since the Nazis had confiscated their papers. Some of the women stepped out of the crowd, fell on their knees, held up their babies, and begged the storm-troopers to let them in anywhere. Anywhere! Even Dachau or another concentration camp. 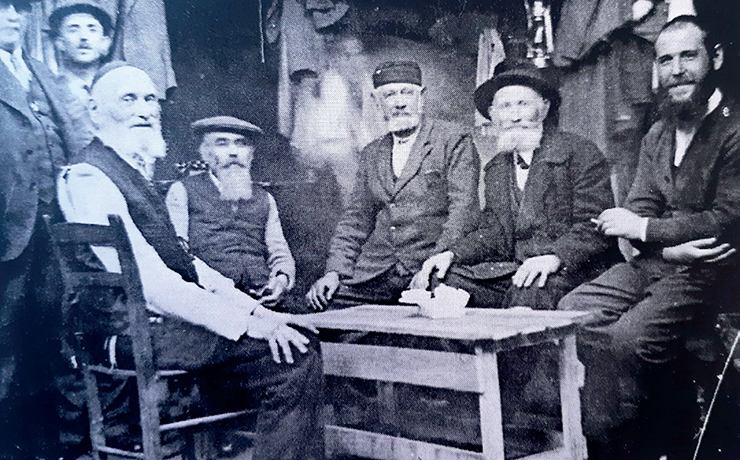 After harassing them for a while longer, the Nazis pushed the Jews down into the cold, dark cellar of a Jewish inn which had become the headquarters of the storm-troopers. My uncle was kicked into the cellar. The Nazis proceeded to give them brooms, brushes, hot water, and soap and told them to scrub the stone floor. Anything to humiliate the Jews. They forced ten-year-old children and 70-year-old men to crawl on all fours while the guards stood over them with small whips. They whipped those who tried to catch their breath. Mothers were not allowed near their babies, who lay crying on a pile of rags. This brutality went on for an entire day.

My family’s former Christian neighbors came by when they heard the Jews had returned to town. These were people with whom they had shared very good relations over the years. Many cried when they saw them. They wanted to help in any way they could. They brought them packages of food, which the Jews were thrilled to receive. The aroma was so pleasant and tempting. But their happiness was short-lived when they realized that the food wasn’t kosher. The religious Jews closed their eyes and moved away from the food. The irreligious ones cut the meat into pieces and began to give it out to the children. My uncle asked my grandfather if he could eat the meat. My grandfather said that he could. But my uncle noticed that my grandfather wasn’t eating and asked him why. My grandfather explained that he himself was not eating because the meat was treif, but my uncle and his siblings were allowed to eat because they were children and it was a situation of pikuach nefesh. My uncle said that, as hungry as he was, he didn’t want to eat, because he didn’t want to have a double aveirah of eating treif and eating chametz.

Among the Christians who were surrounding the inn was a teacher from the school in Kittsee. Some of the children in the cellar were her students and she wanted to speak with them and comfort them. The guards would not permit it. It started to rain and the crowd dispersed, but the teacher remained in the heavy rain, insisting that she be given the opportunity to see her students, including my aunt. Finally, the storm-troopers took her away. The Jews never saw or heard about her again.

Again, the Nazis forced them into wagons and took them back to “No-Man’s Land.” They told them in no uncertain terms never to return. Again, they began to wander around for miles not knowing where to turn. The parents were becoming increasingly worried, and the thought began to cross their minds that they might not survive this ordeal. They decided to make a plan to at least increase the chances of survival of the children. They decided to find a place to get the older children over the border. They knew the babies would never be able to survive such a situation. They would die from hunger and cold. They decided to look for a place of shelter, such as a small hut or barn, where they would leave the babies with the hope that some caring person would find them. They wrote a note, which they were going to leave with them, stating that these were Jewish children. They asked that whoever finds them to please feed and take care of them until their parents, if by some miracle would survive, would come back for them. They would pay in kind those who took care of them for their benevolence. Nobody was happy with this plan, especially the mothers. It was a desperate measure of desperate people in a desperate situation.

As it turned out, in a true expression of hashgachah pratis, at just about this time, one of the men from the group found an unguarded opening in the border leading to a small town in Hungary. He crossed over, entered a village, and knocked on the door of one of the community leaders. All the Jews of the village came quickly and arranged for the entire group to be secretly admitted into the village. The Jews hid in a home there for several days. 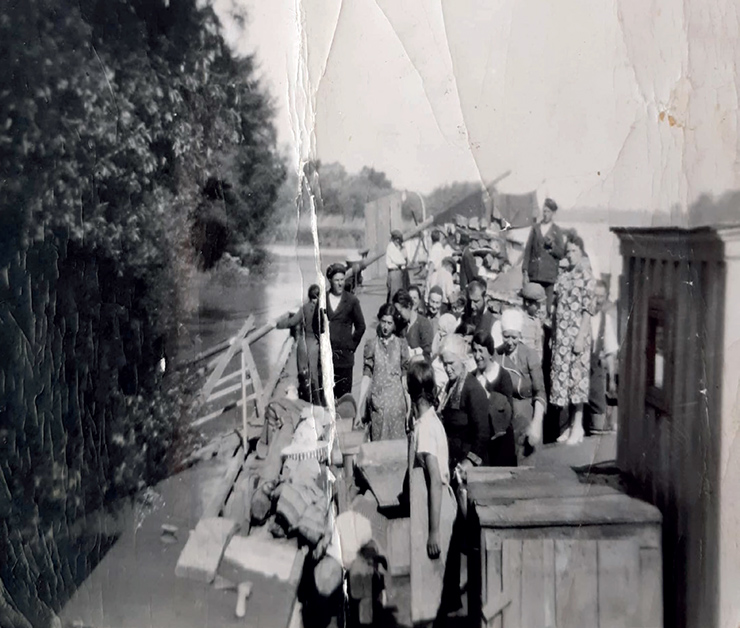 Meanwhile, Rabbi Michoel Ber Weissmandl and his assistant Aharon Grünhut, the heads of the nearby Jewish community of Pressburg (today Bratislava, Slovakia), worked tirelessly to help them. Eventually an arrangement was made. The community of Pressburg agreed to rent a freight barge, a flat-bottomed boat used to transport cargo. The Jews would live on this barge until a more permanent solution to the “problem” was found. Other Jews who had previously been taken from Kittsee were already living on this tugboat, which was located near the city of Rajka, Hungary, on the Danube River. It could be reached by walking over a narrow bridge, and was positioned so that half of it was situated in Hungary and the other half in Czechoslovakia. It was partially submerged, tied by ropes to a pile on the banks of the river. The border patrol guarded the barge to make sure the Jews did not escape.

The barge had an upper deck with no roof, as well as a lower deck. The lower level had one large room which was divided by sheets across its width. The men slept on one side of the room and the women and children slept on the other. The flat deck had no rail. The slightest movement of waves would cause people to get wet or fall into the river. The rope, which was meant to serve as a barrier between the barge and the river, was not nearly sufficient to protect the helpless and oppressed passengers. This caused much stress for the parents who worried that their children would fall overboard. While the children would sleep, my grandmother would stand guard to make sure that the rats did not disturb them. One time, she fell asleep with my aunt sleeping on her shoulder. Someone cried out, “a rat!” Thinking that the rat was on her, and since she was half asleep, my grandmother grabbed my aunt’s hair and threw her away from her.

While they were stuck on the barge, there were people who tried to help them. The caretaker of the shul in Kittsee risked his life to come visit my father’s family. He brought some clothing for the children by wearing layer upon layer. He also smuggled in s’farim for my grandfather and leichter for my grandmother. The Hungarian Jewish community of Rajka took on the care of these tormented Jews and sent them food on a daily basis. It was a true act of chesed on their part, even though the food often consisted of a pot of soup for the entire day. Sometimes the food spoiled on the way to the barge and had to be thrown overboard. They did the best they could under the circumstances.

Neither Austria nor Hungary or Czechoslovakia was happy with the location of the barge. On a daily basis, they threatened to cut the ropes and let the barge float down the river with no captain and no destination. Every day, they had to negotiate new permits. The Jews never knew where they would be the next morning. All of these difficulties created a situation of chronic tension. Their lives were at the mercy of their persecutors. 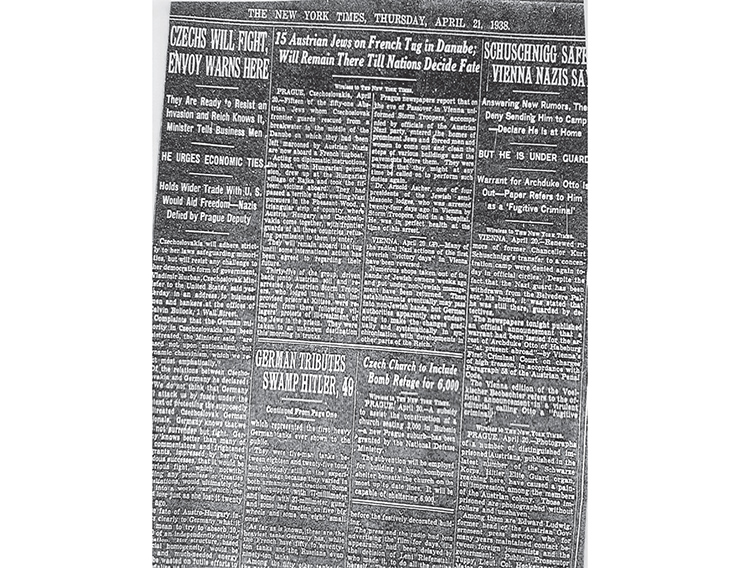 The Nazis would take sadistic pleasure by mocking the Jews. They would arrange special boat excursions to see the confined unfortunates. When their boats would pass by the barge, they would wave kerchiefs in ridicule. Once the Jews realized the point of these excursions, they would run down to the lower deck as soon as they would see a Nazi ship heading in their direction.

During their stay on the barge, reporters from all over the world came to interview them and investigate their plight. The reporters asked questions and took pictures but did nothing to help them out of their predicament. One of their visitors was a young man named Peter de Mendelssohn. He interviewed everyone, especially my grandparents, and spent quite a bit of time on the barge. They found out later that based on these interviews he wrote a novel called Across the Dark River. Although a novel, the story was about 98 percent true. Those who were there can easily identify the fictional characters with their real counterparts.

The Jews of Kittsee stayed on this smelly, rat-infested barge for a period of five months until they were taken to a detention camp in Budapest. There they slept, 16 to a room, on double-decker beds, two and three to a bed. They were not permitted to leave the confines of the area for the 13-month period that they were stationed there.